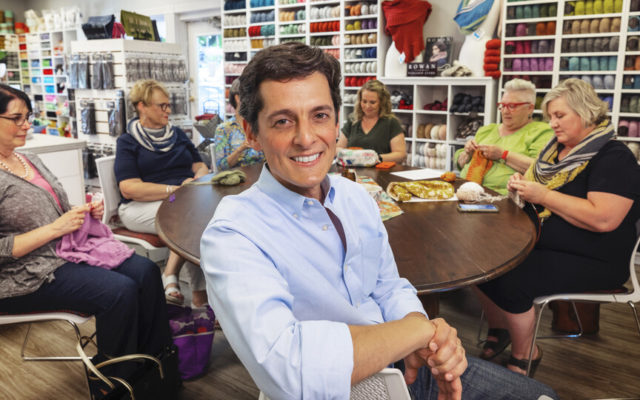 Lincoln, Nebraska (June 16, 2021) — University of Nebraska-Lincoln marketing Professor Andre F. Maciel was intrigued when he chanced upon a knitters’ group in Tucson, Arizona, in 2011, during his doctoral program.

He wondered why people in Tucson, of all places, would devote countless leisure hours to creating shawls, scarves and sweaters. They lived in a desert. Their loved ones rarely needed winter gear. Why were they so committed to an activity often dismissed as dull busywork for elderly women?

Maciel learned that millions of women have taken up the hobby during the past two decades. His curiosity led him to conduct immersive research on the phenomenon, including fieldwork spent learning to knit and sitting in on knitting circles at a yarn shop. Maciel and his co-author, Melanie Wallendorf, McClelland Professor of Marketing at the University of Arizona, visited yarn stores to talk to knitters. They monitored Ravelry.com, an online forum for knitters and other needleworkers. They conducted long interviews with 19 knitters and a survey of 110 knitters. They reviewed about 640 articles about knitting found in large-circulation newspapers and magazines such as The Washington Post, The New York Times and the New Yorker. The two collected data over about seven years, combined.

Maciel eventually concluded those Tucson knitters were not unique. Millions like them across the United States and around the world are engaged in a political and cultural battle to gain more respect for skills often scorned as women’s work.

“There is this idea of cultural inequality in sociology and consumer behavior,” Maciel said. “Some activities and identities are devalued or taken as odd or awkward, while others are taken as normal. If you are a football fan, no one asks you why you do that. But there’s a difference between being a soap opera fan and an avid reader of science fiction, or liking chick flicks versus the nine versions of ‘Fast and Furious.’ Traditional female activities are often devalued.”

Cultural inequality does not necessarily reference socioeconomic status, however. Of the 110 knitters who responded to Maciel’s survey, 87% held a college degree and two-thirds lived in households with earnings of about $90,000. Most of them were white, most held conventional middle-class jobs, and most lived in committed relationships. About half had children living at home.

“We noticed that women were challenging the devaluation of their identities as knitters at home and elsewhere,” he wrote. “They were using the relative mobility of this hobby to make broader assertions about its cultural value — in a sense, turning their needles into small swords.”

Maciel’s findings were published earlier this year by Oxford University Press in the Journal of Consumer Research, one of the world’s highest impact scholarly journals devoted to marketing theory.

Maciel’s article cites famed knitters Debbie Stoller, the bestselling author of the “Stitch ‘N Bitch” book series and founder of BUST, a feminist magazine that infuses empowerment and skillfulness into feminized crafts, and Stephanie Pearl-McPhee, who urges women to take pride in their crafts in her Yarn Harlot blog and book series.

In his research, Maciel observed how the knitters worked in three intersecting arenas toward what he calls a “politicized consumer identity project” to raise their cultural standing.

In private spaces, at home and among family and close friends, they asserted their prerogative to have a designated knitting space or time set aside to knit. In semi-public spaces, such as a yarn shop, knitting group or Ravelry.com, they affirmed one another in their decisions to spend money on expensive supplies or to make group plans for knitting-related activities. In public spaces, such as baseball stadiums, streets, sidewalks and even public marches, they attended “stitch and pitch” events while watching baseball, “yarn bombed” street posts and statues with knitted graffiti, and wore knitted pink “pussy hats” to stand for women’s rights after Donald Trump was elected president.

The devaluation of knitting likely began with the Cult of Domesticity of the Victorian Era. Knitting was among home-oriented activities deemed proper for genteel middle-class women, even though their families could easily afford manufactured textiles.

In the 20th century, knitting and other forms of needlework became the targets of second-wave feminists in the 1960s and 1970s, who argued that such hobbies helped stifle women.

That began to change in the late 20th century, when Martha Stewart and others led a New Cult of Domesticity that embraced household endeavors such as cooking, baking, fiber crafts and home decorating. Maciel credits this movement for sensitizing many women to cultural hierarchies that devalue feminine consumer identities, leading many to take up their needles once more.