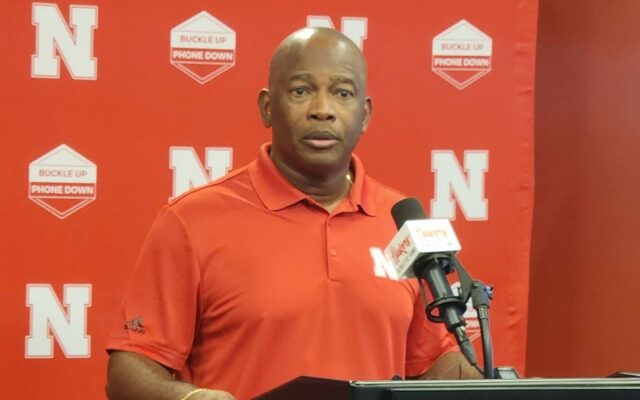 LINCOLN–(KFOR Sept. 13)–Nebraska’s interim head football coach Mickey Joseph met with the media on Tuesday afternoon at Memorial Stadium to discuss his new role leading the Huskers, as they prepare for Saturday’s game against traditional rival and No. 6 Oklahoma at Memorial Stadium.

One of the first things Joseph addressed was the first 48 hours of transition.

“It is a little weird. I did not wake up Sunday morning knowing this was going to happen, but it did and I had to accept it. My message to the team was ‘I know you are hurting.’ (Scott) Frost is like a brother to me. He gave me an opportunity to come here and coach at my alma mater, to coach at the University of Nebraska. I will always love and always appreciate him. I will always respect him,” Joseph said.   “The kids will always love him, but I know they are hurting. At the end of the day that ball is going to kick off on Saturday so mentally we have to get them back and get them ready.”

Regarding being the first African-American head coach at Nebraska, Joseph said it’s bigger than him, it’s about Nebraska football.

When it comes to giving the team some hope, Joseph said he’s offering confidence and letting the players know that he believes in them and to block out what everyone is saying.

“Come to the building every day prepared to win that practice and knowing that you are capable of getting the job done and do not doubt yourself. That is what I am feeding them. I am feeding them confidence,” he added.

Joseph said the players handled the transition and situation of Frost’s dismissal “like champs.”

“The guy that recruited them and that sat in the living room is no longer there. I’m sure we have all been in that situation before, so understand how you would feel. They understand that they play for the University of Nebraska. And it’s time to move on,” Joseph said. “It’s time to get ready for OU on Saturday. They understand that. But they handled it like champs. They bounced back today.”

Kickoff between the Huskers and Sooners is set for 11 a.m., with live national television coverage from FOX. The game will also feature the FOX Big Noon Kickoff Show in Lincoln.