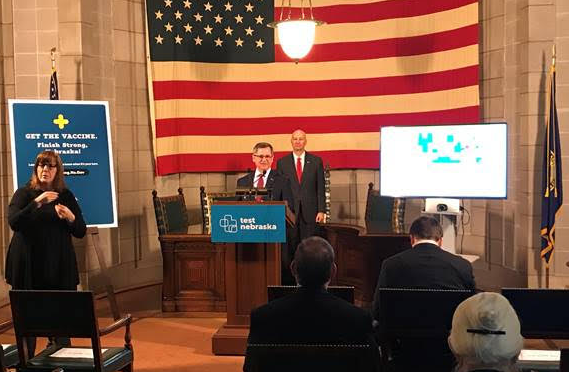 LINCOLN, NE (March 22, 2021) – Today, Governor Pete Ricketts proclaimed March 21-27, 2021 as National Agriculture Week in Nebraska during a press briefing at the State Capitol.  Tomorrow and Wednesday, he will tour agricultural operations across the state with representatives from the Nebraska Department of Agriculture (NDA).

“Over the past 12 months, Nebraska’s family farmers and ranchers have once again shown the world how their grit, strength, and generosity can carry us through tough times,” said Gov. Ricketts.  “Despite the challenges of the coronavirus pandemic, they made sure American families had access to the food they needed to feed their families.  National Agriculture Week is a great opportunity to thank and celebrate the ag producers whose hard work helps to grow Nebraska.  We look forward to taking this message on the road this week to communities around the state.”

“Agriculture continues to be Nebraska’s largest economic driver supporting one out of every four Nebraska jobs,” said NDA Director Wellman.  “Agriculture delivers $21 billion in gross receipts to the state each year.  I want to thank Nebraska’s farmers, ranchers, and the many businesses that support them, and encourage them to continue their great work of producing safe, healthy food for us and consumers around the world.”