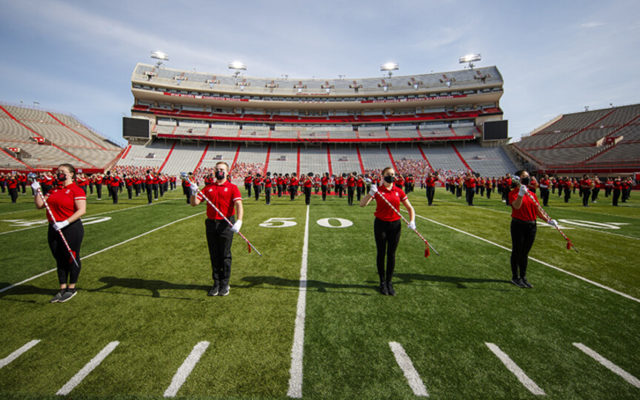 Lincoln, Nebraska (Aug. 11, 2021) — The Cornhusker Marching Band’s annual exhibition concert will return at 7 p.m. Aug. 20 in Memorial Stadium. The concert is free and open to the public.

The performance will include a preview of the first halftime show of the 2021 football season, favorite Husker songs and a “drill down” contest in which band members follow rapid marching instructions to try to be the last person on the field.

“I’ve had many people tell me they enjoy coming to the band exhibition because it helps them annually begin their school year,” said Doug Bush, assistant director of bands and assistant marching band director. “It’s just a fun, free, family event where we gather in Memorial Stadium, hear and clap along with the fight songs and see what the Cornhusker Marching Band has been up to during band camp. It’s a special event. Exhibitions this size don’t happen everywhere.”

Tony Falcone, associate director of bands and director of the Cornhusker Marching Band, said the band has its work cut out for it in camp.

“Two entire classes of the band (this year’s freshmen and sophomores) won’t have performed in front of 90,000 in Memorial Stadium,” he said. “That’s going to be a steep learning curve, and we’re going to have to rely heavily on our student leadership for guidance and institutional memory to get us back up to speed.”

The exhibition gives band members a practice run before their first home game.

“Although they don’t really look at it as practice; they take it seriously,” Bush said. “It’s a way for them to get the first-show jitters out before that first pregame performance with 90,000 fans in the stands.”

It’s a return to a more normal season after the COVID-19 pandemic canceled the exhibition concert last season and the band did not perform live at football games. In fact, no more than two-thirds of the band rehearsed in Cook Pavilion at one time last year.

“I think I speak for the entire band when I say that we can’t wait to have a more normal band experience this fall,” said drum major Katherine Schmit, a junior music education major from Lincoln. “Last year looked much different than a normal year. Rather than working on a different halftime show each week, we worked on one show for the whole season, which was recorded and shown during football games.”

Falcone said he is excited to get back on the field in front of an audience.

“I think it will be a jolt to everyone’s system to feel that energy again, audience included,” he said. “There will be a lot of goosebumps and tears. What I’ve missed the most is watching the students enjoy the experience and come together as a family through all the hard work. We did our best to preserve that last season, but it was a challenge.”

Fans attending the exhibition should enter Memorial Stadium through Gates 3 and 11 (southwest and northwest entrances, respectively). The gates will open at 6 p.m.