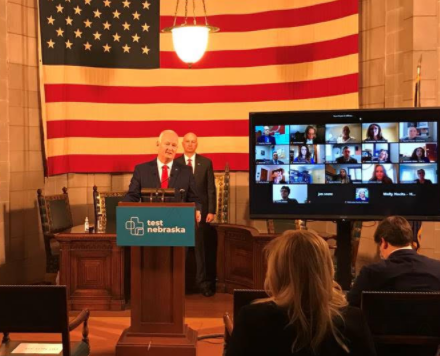 Nebraska’s Attorney General Doug Peterson has joined 23 other attorneys general in sending a letter to President Biden warning that litigation will follow if the President follows through with his vaccine mandate.  The letter objects to the implementation of the proposed mandate on private-sector employees to either get a COVID-19 shot, submit to weekly testing, or be fired. The coalition of attorneys general outlined their legal and policy concerns with the mandate, which will be carried out through an Occupational Safety and Health Act emergency temporary standard.

The letter says history has shown that the judicial branch is highly skeptical of the use of OSHA emergency temporary standards because of concerns about federalism and the separation of powers. Further, the attorneys general raise concerns about the expansion of federal regulatory power and the order’s constitutionality.

The coalition of attorneys general also addresses the practical policy concerns of what they called “such a sweeping order.” They said the potential to drive individuals out of the workforce, particularly healthcare workers, who are most needed right now, is also problematic. Additionally, they said “this mandate ignores the tens of millions of Americans with natural immunity and will drive further skepticism of vaccines.”

Last, and in their words most importantly, the attorneys general note there are alternatives to a broad, nationwide order. The letter states, “The risks of COVID-19 spread also vary widely depending on the nature of the business in question, many of which can have their employees, for example, work remotely. The one-size-fits-almost-all approach you have decreed makes clear that you intend to use the OSHA statute as a pretext to impose an unprecedented, controversial public health measure on a nationwide basis that only incidentally concerns the workplace.”