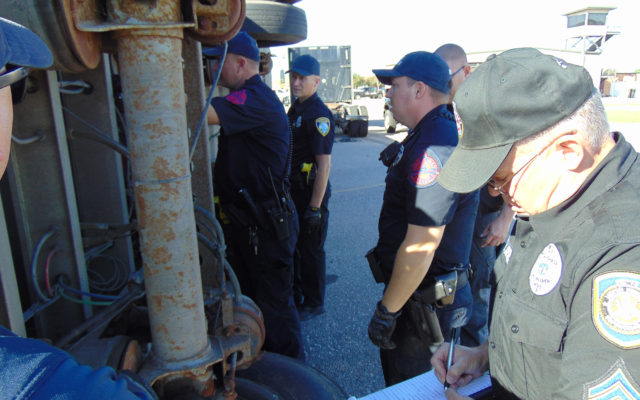 SEPTEMBER 27, 2021 (GRAND ISLAND, NEB.)  — Troopers and officers from 15 states and 20 agencies have new skills to serve their communities thanks to the Nebraska State Patrol (NSP). On Friday, the NSP Carrier Enforcement Division completed a series of training sessions which offered instruction in multiple disciplines of commercial motor vehicle inspections.

“We were proud to host dozens of troopers and officers from other states as they work to gain skills to better serve their communities,” said Captain Martin Denton, Commander of NSP Carrier Enforcement. “Traffic safety is a partnership that crosses state lines and our team is always willing to share knowledge and skills with other agencies.”

NSP hosted training sessions for the last two weeks at the NSP Training Academy in Grand Island. Troopers from 14 state law enforcement agencies, officers from several other agencies, and representatives from the Commercial Vehicle Safety Alliance all participated in the training.

“This class was modeled on what our troopers were seeing in the field,” said Captain Denton. “Post-crash inspections are critical in criminal cases and other crash investigations. This program was a perfect opportunity to not only fine-tune our internal training, but also share techniques and training with many other agencies. We’re all working together to make roads safer.”