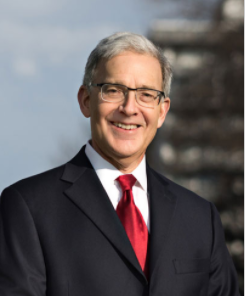 Lincoln, Neb., Feb. 8, 2022 – Nebraska Secretary of State Bob Evnen, along with 25 delegates from the University of Nebraska-Lincoln, Nebraska commodity groups, state government, and private industry, will visit the United Arab Emirates and Jordan during a trade mission this month.

The Secretary of State, in coordination with the Governor, has the responsibility to promote international commerce and the international exchange of education and culture. The highly diverse members of this trade mission include university faculty, representatives of ag commodity groups, and private sector businesses involved in agricultural technology including water utilization, value-added ag products, food preparation pest control, network security, and entrepreneurs in other sectors as well.

“I am very proud of this fine delegation which will ably represent in the Middle East and I am grateful to the many sponsors who made this possible,” Secretary Evnen said.

UNL researchers will present at the Gulfood, the largest food trade show in the world. Nebraska is one of just two states the U.S. Embassy in Dubai invited to a special showcase, which includes a Taste of Nebraska event. UNL experts from throughout the Institute of Agriculture and Natural Resources will give presentations during the show on Husker research in the areas of beef production; water management and precision irrigation; food processing; and the Food for Health Center, which seeks to improve human health by linking agriculture and food production to wellness and disease prevention through microbiome research.

Additionally, the UNL delegation will meet with leaders and university representatives from throughout the U.A.E. and Jordan, and the UNL animal science faculty will also give meat cutting demonstrations and presentations on Nebraska beef production at several top culinary schools.

“Nebraska is known for its contributions to feeding and fueling a growing world sustainably.  Our farmers and ranchers are both the engine of Nebraska’s vibrant and profitable agricultural production systems and stewards of the state’s abundant natural resources – our soils, air, and water,” said Mike Boehm, University of Nebraska vice president and Harlan Vice Chancellor for the University of Nebraska-Lincoln’s Institute of Agriculture and Natural Resources. “This trip underscores the important role Nebraska plays on the worldwide agricultural stage.”

The trade mission is the second one announced today by a high ranking State official.  Governor Pete Ricketts announced this morning that he would lead a Trade Mission to The United Kingdom in August.