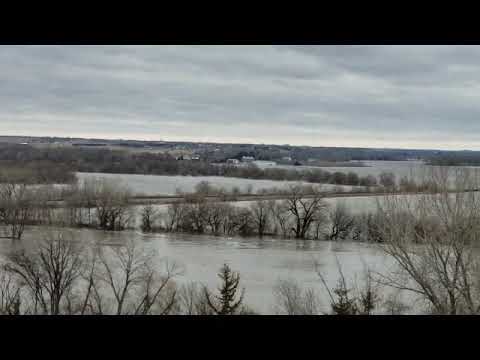 OMAHA–(AP Jan. 8)–Despite more than doubling releases from its reservoir system, the U.S. Army Corps of Engineers still doesn’t expect to eliminate all the leftover water from last year’s near-record runoff that led to massive Missouri River flooding.

The Corps had been discharging about twice the normal winter amount from Gavins Point Dam — the southernmost in the six-dam system. The Corps said it was raising the discharge this month to 30,000 cubic feet (849.5 cubic meters) per second, an increase of more than 11%.

Until a seasonal decrease that began in November, the amount being released had been 80,000 cubic feet (2,265 cubic meters) per second for months, also more than twice the average.

Areas along the Missouri River and its tributaries in parts of Nebraska, Kansas, Iowa and Missouri were ravaged by floodwaters in the early spring. Heavy rains later in the year reflooded many areas that had been left unprotected because of levee failures.

John Remus, chief of the Corps’ Missouri River management, told the Omaha World-Herald the reservoir system needs to make as much space as possible in light of the National Weather Service forecast for warmer than normal weather and higher than normal runoff in January and February.

The Corps normally doesn’t release more during the winter because of the potential for ice jams and dams upriver, Remus told The Associated Press on Wednesday.

Once the river freezes over it essentially becomes a pipe, Remus said, limiting its capacity.

If you increase the releases and “burst the pipe you’re dealing with ice jams and possibly ice dams” that cause flooding nearby, he said. “Our ability to release water goes practically to zero until that ice gets moved out somehow.”

He cited for example a temporary cutback in the release at North Dakota’s Garrison Reservoir last week because of river ice conditions to the south, near Bismarck.

The Corps will keep a wary eye on the ice and river flow upstream and raise the Gavins Point and other releases if it can, Remus said.