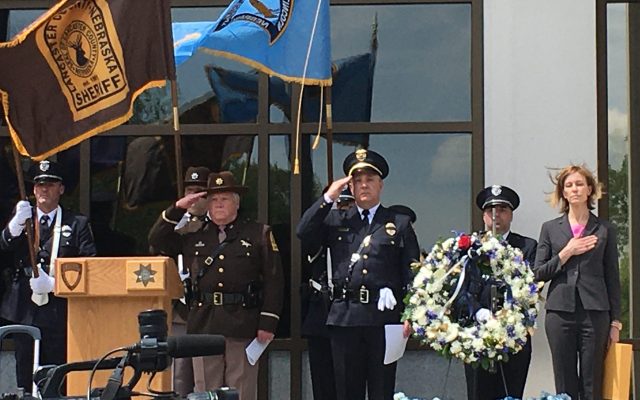 Acting Police Chief Brian Jackson says the efforts of those ten officers and deputies who died in the line of duty have resulted in the ultimate sacrifice.

“Their service through sacrifice is already consecrated their legacy.  Those men and women are already crowned by their courage,” Jackson said.

Jackson took time also to honor the seven LPD officers who died in the line of duty. That included Investigator Mario Herrera, who was shot last August while serving a warrant at a home at 33rd and Vine and died last September.

“He was a distinguished investigator, having worked both in our criminal and narcotics unit,” Jackson added.  “He was very skilled on what he did, successful often, due to his ability to gain the trust for those he interviewed.”

Mayor Gaylor Baird delivered a proclamation to LPD that reminds us of what officers do each day to serve and protect, while putting their lives on the line.  A proclamation was prepared by the Lancaster County Board of Commissioners and read by Sheriff Terry Wagner.

LSO has only had three deputies die in the line of duty, most recently Craig Dodge, who was shot and killed while responding to a domestic disturbance in Hickman in March 1987.

Here are the list of fallen law enforcement officers/deputies in Lincoln and Lancaster County.

Captain Charles E. Hall died on March 31, 1917 in a motor vehicle accident near 33rd and Adams. Detective Hall and his driver, Frank Feeney, were in pursuit of a stolen auto at the time of the accident. Detective Hall had been Chief of Police in O’Neill and had also served as the Sheriff of Holt County. Detective Hall was 53 years old and survived by his wife, Rhoda, and four children.

Shortly after midnight on September 7, 1932 Special Duty Patrolman Marshall observed a suspicious person on a bicycle in the alley west of S. 16th Street between G and H Streets. He drove around the block to investigate, encountering the subject at the alley exit on 15th Street. During the contact, the subject pulled a gun and shot Marion Marshall. The mortally wounded patrolman managed to crawl to the Governor’s Mansion, rang the bell, then collapsed on the top step of the porch. He was found there by Governor Charles Bryan, who had pulled on his clothes and gone to the door. The Governor summoned authorities and Special Duty Patrolman Marshall was taken to the hospital, where he passed away two days later, at the age of 35. He was survived by his wife and three children.

Officer Richard E. Leyden died on September 26, 1949 of injuries suffered in a traffic accident on 16th St. between G and H where his police motorcycle collided with a vehicle. Leyden was to be married on October 2, 1949.

Detective Lieutenant Frank H. Soukup died on December 16, 1966. Lt. Soukup and two other detectives went to 2413 P Street on a forgery investigation and encountered five suspects. During questioning one of the men produced a handgun and shot Lt. Soukup. The officers returned fire and killed the suspect. Lt. Soukup was 53 years old and survived by his wife, Bernice, and three children.

Detective Paul B. Whitehead died on August 10, 1967. Detective Whitehead and Detective Paul Merritt stopped a suspicious car near 38th and O Street. Unknown to the officers, the vehicle was occupied by three escapees from the Indiana State Prison. During the initial moments of the contact, one of the suspects produced a sawed off shotgun and shot Det. Whitehead. Det. Merritt returned fire and seriously wounded the suspect. The other men escaped but were captured later. Detective Whitehead was 30 years old and survived by his wife, Janet, and three children.

Officer George W. Welter died on February 9, 1968. Officer Welter’s police motorcycle collided with a vehicle at 27th and W Streets as he responded with lights and siren to an emergency call at 26th and Q. Officer Welter was 25 years old and survived by his wife, Sandra, and three children.

On August 26, 2020, Investigator Herrera was helping serve an arrest warrant for a suspect involved in a homicide. As officers surrounded the house at North 33rd and Vine Streets, the suspect and an accomplice fled from the residence through a window. The suspect fired multiple times at officers. He was captured a short distance away, about an hour later. One of the suspect’s bullets struck Investigator Herrera in the chest. For 12 days, Investigator Herrera courageously fought for his life until succumbing to his injuries on September 7, 2020. Investigator Herrera was 50 years old and faithfully served the Lincoln Police Department for 23 years. He was an immensely talented and highly decorated investigator, known for his kind, compassionate and empathetic personality. He is survived by his wife, Carrie, and four children.

On March 14, 1987, Deputy Sheriff Craig Dodge was killed during a confrontation with an armed assailant while on a domestic violence call in Hickman, NE.

On November 16, 1973, Sergeant Franklin Furrer died after suffering a heart attack two weeks earlier during a drug raid of a residence near Walton, NE.

On March 5, 1959, Deputy Sheriff William Johnson died after suffering a heart attack following a prisoner transport at the county courthouse in Lincoln, NE.