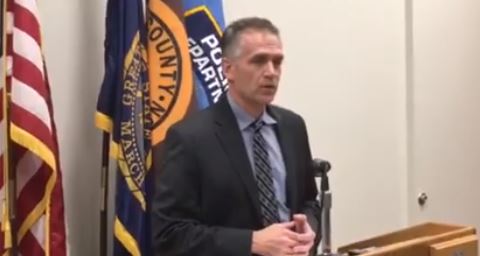 (KFOR NEWS  December 22, 2020)   Police Chief, Jeff Bliemeister, has accepted a position in the private sector.  His last day with the City will be January 8, 2021.  Bliemeister joined the City as the result of a national search process conducted after the retirement of Police Chief Jim Peschong in 2016. He previously served four years as the Chief Deputy Sheriff for Lancaster County and began his law enforcement career in 1996 as a Deputy in that office.

“I value the partnership Chief Bliemeister and I established to support the important work of our Lincoln Police Department,” said Mayor Gaylor Baird. “During our work together, we were able to fund the addition of 11 new positions and negotiate a labor contract that provides a competitive salary and benefit package to the men and women serving our community as Police Officers.”

“For the last 24 years, I had the opportunity to serve the residents of Lincoln and Lancaster County, beginning with the Sheriff’s Office and later with the Lincoln Police Department,” Chief Bliemeister said. “I was fortunate to work with so many talented and passionate individuals. I am proud of them as I saw the positive impact they made.  I want to extend my thanks and appreciation to my co-workers and countless residents who have touched my career. In January, I will begin a new career with Bryan Health. I am excited to be part of an organization that contributes to the safety and well-being of those in Lincoln and the region.”

The Mayor thanked Chief Bliemeister for his exemplary service and praised his leadership during this challenging year, including his role as part of the multi-department Incident Command handling the city’s response to the  COVID-19 pandemic. She said he provided essential support for LPD after the death of Investigator Mario Herrera, the first on-duty death of a Lincoln Police Officer in over 50 years.  The Mayor also praised Chief Bliemeister for the additional community engagement efforts he participated in following the protests in late spring.

“His leadership benefitted the strong community partnerships that are part of the fabric of the Lincoln Police Department,” Mayor Gaylor Baird said. “Chief Bliemeister increased efforts to strengthen relationships with our community by improving transparency in police practices, connecting with our communities of color, and embracing accountability measures.  We will miss his contributions to our city team, but I know his dedication to keeping our community safe will continue in his new role.”

Assistant Chief Brian Jackson will serve as Acting Chief of LPD as the city engages in a search process for the next permanent leader of the department.  Jackson served in that role in 2016 prior to Chief Bliemeister’s hiring.