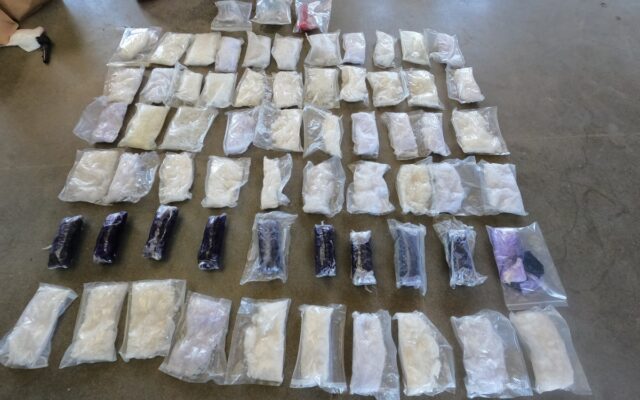 LANCASTER COUNTY–(KFOR July 14)–A traffic stop just before 10am Wednesday along Interstate 80 near Emerald in western Lancaster County ends up turning into a large narcotics bust.

In a news release, Lancaster County Sheriff Terry Wagner said that members of the Criminal Interdiction Unit pulled over a motorhome along I-80 at mile marker 391 for driving on the shoulder.  During the stop, investigators had developed reasonable suspicion to have a trained K-9 narcotics dog sniff around the motorhome.  The dog smelled drugs, which led to a search of the fuel tank where officers found sixty, one-pound vacuum sealed bags of methamphetamine, just over two pounds of heroin, and about .58 pounds of fentanyl.

A more in-depth search also recovered three guns (a 9mm pistol stolen out of Minnesota in January, along with a .22 caliber revolver and a .380 caliber pistol).  Two previously convicted felons, 60-year-old John Kirchner of St. Paul, Minnesota and 30-year-old Wesley Stayberg of Hudson, Wisconsin, were in the motorhome.  Stayberg started to feel sick and admitted to consuming one gram of heroin that he had on him.  Wagner said Stayberg started to lose consciousness and was administered NARCAN, before he was taken to a Lincoln hospital.  After treatment, Stayberg was taken to jail.

In addition, stayberg was charged with tampering with evidence.