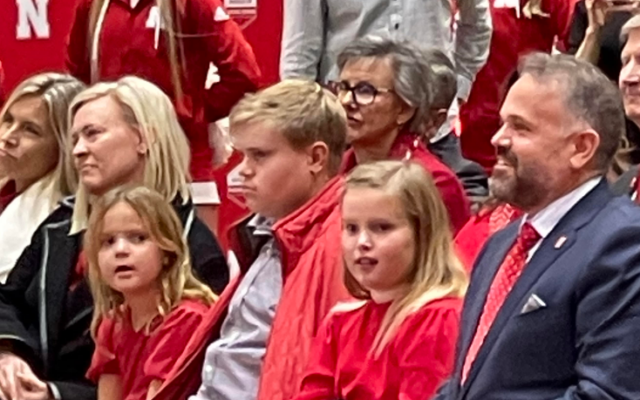 Lincoln, NE (November 28, 2022)  Matt Rhule is now officially the new head coach of the university of Nebraska football team. He was introduced this afternoon in a press conference at the University’s Hawks Championship center. He replaces Scott Frost, who was fired early in the season, and Mickey Joseph,. who acted as interim head coach for the bulk of the season.

Rhule said he had other offers, but selected Nebraska…saying his wife was his main advisor.

“Since the very first day I got a phone call about a job and a University and different people coming at us, she has said ‘this place, these people, this is the right fit for us.’”

The former Carolina Panthers coach said he will build a winning team through hard work.

He paid tribute to the tough teams of the past, and said he wants to earn the respect of the Husker fan base.

“We can’t win every game every year, it just doesn’t happen, but you can certainly be a team that people are proud to watch.  That’s the type of team I want to be.”

Rhule said under his leadership, the Huskers will look more like an old school team.

“We are going to be a physical team.  We’ll be balanced, we’ll always try to do what the players do well, but at the end of the day I don’t believe you can win if you don’t win the line of scrimmage.”

He added that recruiting the right kind of players will be important also.

The new Husker Coach said says he’s respected and revered Nebraska football since the 1982 kickoff classic, when the Huskers blew out his Alma Mater, Penn State.  He said he’ll go to work tonight recruiting and visiting with team members and coaches.

Athletic Director Trev Alberts thanked Interim Head Coach Mickey Joseph for the job he did after taking over the team early in the season following the firing of Scott Frost.

“I had a lot of respect for Coach Joseph prior to him becoming our Interim Coach.  I have more respect for him now.  The way that he worked, continued working, doing the right thing, fighting hard for these young men and investing in them was really something.”

Rhule said he will visit with team members and the current members of the coaching staff, including Joseph, but no decisions on their future have been made yet.