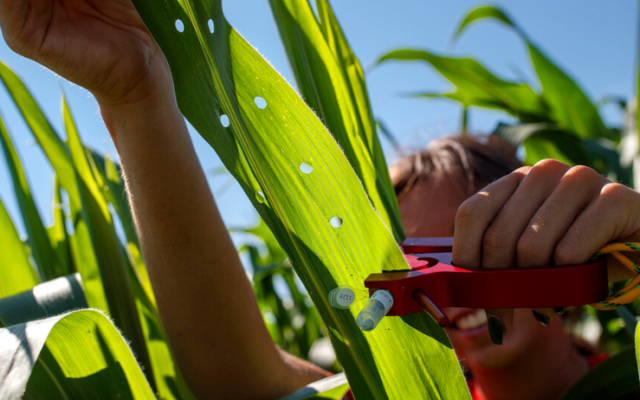 Lincoln, Nebraska (July 29, 2021) — The use of “digital twins,” virtual copies of physical objects and operations, is gaining steam across a wide range of industries. Updated constantly with real-time data, these virtual mirrors allow engineers to keep an eye on and predict traffic flow, retailers to optimize supply chains and railway operators to spot wear and tear on tracks. Researchers are even working toward digital twins of the human heart, which would let doctors diagnose, treat and monitor patients from afar.

Until now, the technology had not been widely employed in agriculture, even as the world races to secure a sustainable food supply for a population on track to reach nearly 10 billion by 2050. Today, the National Science Foundation and U.S. Department of Agriculture’s National Institute of Food and Agriculture announced a five-year, $20 million grant to establish the AI Institute for Resilient Agriculture, or AIIRA. It’s part of a $200 million federal effort to develop artificial intelligence hubs that address a variety of national needs.

A collaboration of eight institutions — including the University of Nebraska–Lincoln and led by Iowa State University — is launching the institute with the aim of deploying digital twins, powered by advances in artificial intelligence, throughout the agricultural space.

AIIRA was one of 11 NSF-led AI institutes announced July 29, which join seven that were launched in August 2020.

He will tap into the university’s Research and Extension Centers, which span the state from a site just outside of Lincoln to the Panhandle Research and Extension Center — located 400 miles to the west, at 2,700 feet higher in elevation and with only half of Lincoln’s precipitation — to grow, test and genetically analyze various corn and sorghum varieties during the project.

“In Nebraska, we’re able to evaluate crops under a wide range of different stressful conditions,” said Schnable, associate professor and the Charles O. Gardner Professor of Agronomy. “Only a few states have the geography to make that possible, and of those, few have made the necessary investments in facilities and people. It’s a really unique asset we have here, and it’s a big part of what I’m able to leverage to get big consortiums interested in doing research in Nebraska.”

To bring digital twinning to agriculture, the researchers are capitalizing on increasingly sophisticated plant, soil and weather sensors and automated devices such as drones and robots. These technologies transmit real-time data — such as weather information, water and nitrogen measurements, and soil and topography maps — to predictive digital twins, which also incorporate data reflecting the latest understanding of plant growth and development. The team will twin both individual plants and entire farm fields.

Digital twins overcome real-world constraints on the number of experiments researchers can run on crops in the real world, where a breeder might evaluate 2,000 potential new varieties in a single environment, or an agronomist might test five levels of fertilizer application on 10 hybrids at a dozen locations, each with their own unique combination of weather and soil properties. Digital twinning circumvents that, enabling researchers and producers to simulate endless what-if scenarios and apply their findings to on-the-ground decision making.

“Creating a digital twin means building a model of how plants perceive and respond to their environment,” Schnable said. “Once we have that, we can run hundreds of thousands of different simulations where we put the digital twin of an individual corn plant or a whole field through different weather or agronomic practices, or make specific changes to the plant we know is possible to achieve through breeding. Running all these simulations lets us prioritize which combinations of plant genetics and farm management practices are likely to give the best outcomes for farmers in specific environments.”

For farmers, this could eventually translate into a decision support tool that provides actionable information. Today, farmers make decisions about which hybrid to plant, and the timing and amount of irrigation and fertilizer, based on their knowledge of the weather, their farm’s soil and previous experiences. But for farmers who may have only 40 growing seasons in their careers, big changes can be risky. Digital twins would let them test out a wider range of options on a computer, helping farmers maximize profit and minimize environmental impact.

For Nebraska, participating in the institute is an opportunity to strengthen its position as a national leader in agricultural resilience. Collaborating with global experts in AI will advance the university’s extensive work in this area and underscores Nebraska’s commitment to its Grand Challenges, which include climate resilience and sustainable food and water security.

“We’re getting to work with and build new connections with some of the world leaders in AI,” Schnable said. “Just in the process of organizing the team and writing the proposal, I’m already seeing folks develop a new excitement about the research questions and problems of agriculture and stress biology.”