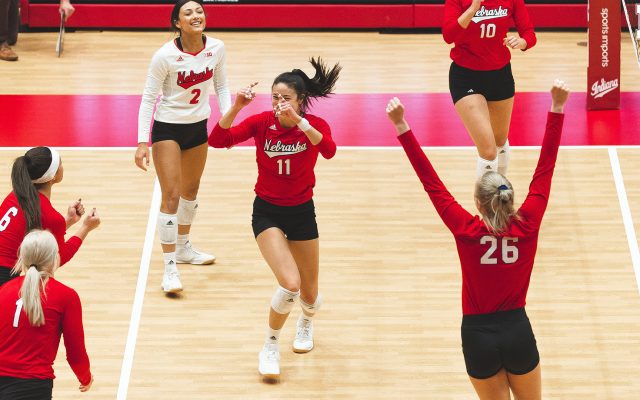 Lincoln, NE (June 30, 2021) Hayley Densberger of the Nebraska women’s volleyball team and Michael Hoffer of the Husker men’s track and field team were honored as Nebraska’s Outstanding Sportsmanship Award winners by the Big Ten on Wednesday, as the conference announced its 28 honorees. These standouts were chosen from a group of more than 350 students honored throughout the academic year for displaying positive sportsmanship.

One member of each varsity sports team on every campus was chosen by his or her institution as a Sportsmanship Award honoree, and two Outstanding Sportsmanship Award winners were then selected from each institution. All of the Sportsmanship Award winners have distinguished themselves through sportsmanship and ethical behavior. In addition, these honorees must be in good academic standing and must have demonstrated good citizenship outside of the sports-competition setting.Densberger, a senior from Malcolm, Neb., finished her collegiate career at Nebraska with 205 career digs and 39 service aces. During her senior season, she served a pair of aces in an NCAA Regional Semifinal win against No. 11 Baylor. Densberger was also impressive in the classroom and in the community as she was named an Academic All-Big Ten honoree four times, was a three-time Big Ten Distinguished Scholar and was awarded the 2021 Nebraska Outstanding Scholar. She graduated in May of 2021 with a degree in psychology.

Hoffer, a junior from Topeka, Kan., took 20th place in the long jump at the 2021 NCAA Championships and picked up USTFCCCA honorable mention in both the high jump and long jump. He qualified for the championships with a long jump personal best of 25-8 1/4 (7.83m), the No. 7 wind-legal jump in school history. An Academic All-Big Ten honoree, Hoffer is majoring in business management.

Both Densberger and Hoffer are members of the Tom Osborne Citizenship Team. Additionally, they have been named to the Nebraska Scholar-Athlete Honor Roll a combined 11 times.