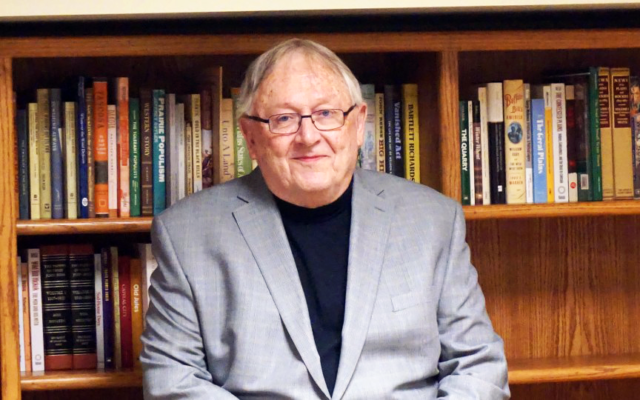 Lincoln, NE (August 19, 2021) Humanities Nebraska (HN) has selected author and historian of the American West John  R. Wunder to receive the 2021 Sower Award in the Humanities.

A long-time University of Nebraska-Lincoln (UNL) history professor, Wunder has written  about the Great Plains, Nebraska, Plains Indians, and American Constitutional legal history. He  has published or edited 22 books and numerous essays and journal articles. His book “Retained  by the People: A History of American Indians and the Bill of Rights” (1995) won the Phi Alpha  Theta national history honorary society’s award for the best history book that year. He has won  many other awards and fellowships, including the Lifetime Achievement Award from Native  American Scholars.

“John Wunder’s ability to capture the imagination of people of all ages, through his teaching,  his community participation, and the extension of his work through his writing, speaks directly  to the meaning of the Sower Award and the symbol of excellence it represents,” said nominator  Ron Hull. Hull is an author, a former general manager of the Nebraska public television network,  a former PBS executive, and the 2000 recipient of the Sower Award.

Wunder is described as an accomplished administrator, educator, mentor, and leader. He  has served as director of the Center for Great Plains Studies and president of the Mari Sandoz  Heritage Society. He was also the first scholar from Nebraska to be chosen as president of the  1,300-member Western History Association.

Wunder will be honored on October 12, 2021 during the 26th Annual Governor’s Lecture  in the Humanities at the Holland Performing Arts Center in Omaha. Titled, “Finding Your  Roots: A Conversation with Henry Louis Gates, Jr.,” the free public event will begin at 7 p.m.  following a benefit reception to help raise funds to support HN’s statewide programming. A  live-stream viewing option will also be available.