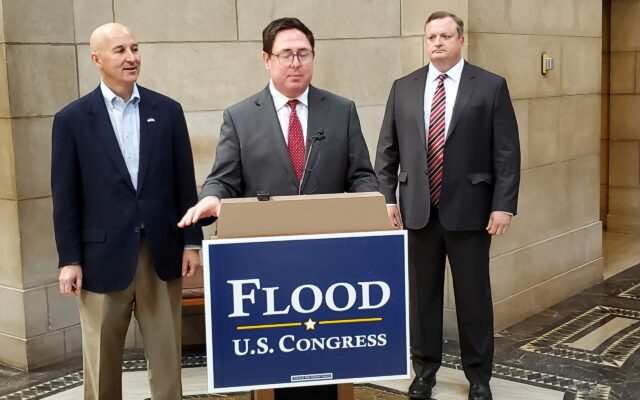 Associated Press= OMAHA, Neb. (AP) – Nebraska state Sen. Mike Flood has won a special election to replace former U.S. Rep. Jeff Fortenberry, a fellow Republican who was sentenced to two years of probation earlier in the day for a conviction on charges that he lied to federal agents.

Flood, a former speaker of the Nebraska Legislature, will serve the rest of what would have been Fortenberry’s ninth term. He’ll be a strong favorite to win a new term in November, when he faces Pansing Brooks again in the general election.

Flood told supporters at his headquarters in Norfolk that First District voters consider problems with the economy the number one issue.

“The highest inflation in 40 years, record high gas prices, Government spending out of control, savings shrinking, retirements at risk, and more and more Nebraska families are finding it tough because there’s not enough money at the end of the month.”

Flood predicted that the Republicans will re-take control of the House of Representatives in the November General Election.

Democrat Patty Pansing Brooks said she was encouraged by the closeness of the race, and because it was not as wide a Republican victory margin as usual.  She said the results of the Special Election Campaign will help her focus better for the upcoming General Election Campaign.

“I feel very gratified and excited.  It gives me hope, it teaches me where I need to do a better job of reaching out to voters.  Clearly the places where we’ve done a really good job of going door to door.”

Pansing Brooks said she believes the Supreme Court decision on abortion helped increase the voter turnout, adding that she will be glad to be in the Legislature for the coming battle over proposals to regulate abortion in Nebraska.

“I had some people posting on social media that they didn’t want me to win this time because they wanted me to be there in the Legislature if they call a special session.”

At the time Flood declared victory, he was leading by approximately 52%-48%.  Once the Secretary of State certifies the election results, a swearing in ceremony will be arranged at the U.S. Capitol to begin Flood’s term as Nebraska’s First District Representative.