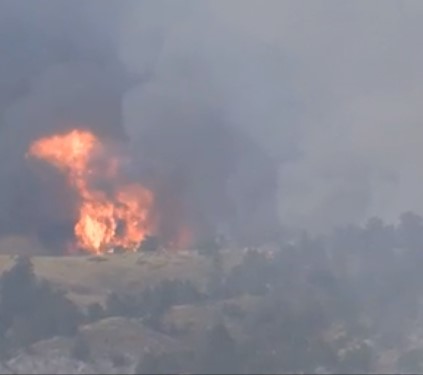 (KFOR NEWS  September 15, 2022)   Erratic winds and a temperature inversion trapping smoke near the ground, are some of the obstacles facing firefighters in the 3,700-acre Smokey Fire in Western Nebraska.

Incident Commander, Tim Grubbs, fire chief for the Banner County volunteer fire department, said he is concerned for potential erratic fire behavior that could occur when the inversion lifts.

“Firefighters from nearly 30 departments worked through the night to combat the Smokey Fire,” Grubbs said. “The many air assets fighting this fire along with those firefighters on the ground are working tirelessly to get this fire under control.”

Grubbs reported they are working on establishing fire containment lines around the entire fire perimeter but do not yet have a percentage of containment.  He also reported that Wright’s Gap Road is closed for traffic and asked that people stay out of the area.

Grubbs also thanked the public for their generous support of the volunteer firefighter’s efforts.  Donations are being coordinated by the Firefighter Ministries.  Any additional needs will be listed on the Banner County facebook page at: https://www.facebook.com/profile.php?id=100057241159793.