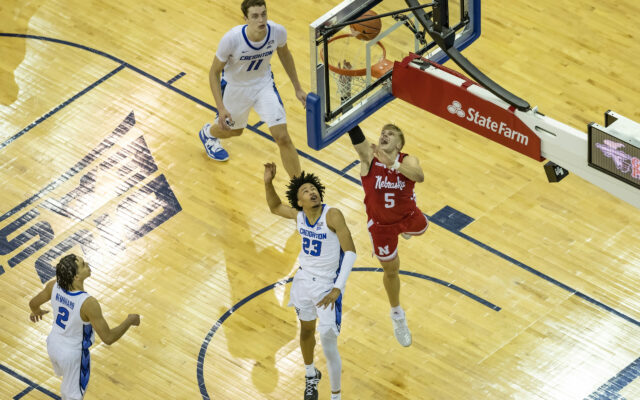 OMAHA–(NU Athletics Dec. 4)–Derrick Walker and Sam Griesel combined for 40 points and 20 rebounds, as Nebraska knocked off No. 7 Creighton, 63-53, Sunday afternoon at the CHI Health Center.

Walker led three Huskers (6-3) in double figures with a career-high 22 points on 11-of-16 shooting and eight boards, while Griesel added 18 points 12 rebounds and seven assists as Nebraska picked up its third straight road win against a ranked opponent dating back to last year.

Griesel, who had 13 of his 18 in the second half, scored six straight in a decisive run after Creighton cut an eight-point lead to 36-33 with just over 10 minutes remaining. His spurt pushed the Husker lead to nine, as Nebraska shot 52 percent in the second half and withstood a barrage of Bluejay 3-point attempts.

Creighton to within 44-39 after Francisco Farabello’s 4-point play, but Griesel came back with a three-point play on the ensuing possession and Nebraska stretched the lead in the final minutes in picking up its first win over the Bluejays in Omaha since 2004.

Nebraska held Creighton to just 30.8 percent shoting, including 10-of-40 from 3-point range. NU attacked Big East Defensive Player of the Year Ryan Kalkbrenner, as Walker had 22 of the Huskers 46 points in the paint over the Bluejays.

After a defensive struggle in the first half, the Huskers scored the first six points comig out the locker room, as Walker’s layup made it 31-23 with 18 minutes remaining. Creighton (6-3) scored seven straight to get within 31-30 with 13:19 left, but C.J. Wilcher’s steal and dunk and a 3-pointer by Wilhelm Breidenbach pushed the margin to 36-30.

Nebraska turned the game into a defensive battle in the first 20 minutes, as the Huskers took a 25-23 lead into the locker room.

NU held the Bluejays to just 26 percent shooting in the opening 20 minutes in holding Creighton to its lowest scoring half of the season. NU shot 42 percent and out-rebounded CU, 20-19, in the opening stanza as the largest lead by either team in the half was four points.

Walker keyed an early Husker surge, as he had six early points as the Huskers built an 8-4 lead after an Emmanuel Bandoumel layup. The Bluejays would respond with an 8-0 run of their own, taking a 12-8 lead after a Baylor Scheierman 3-pointer with 14:09 left before baskets by Walker and Bandoumel evened the contest with 12:48 left in
the half. The rest of the half would see neither team enjoy more than one-possession lead.

Walker keyed NU’s first half with 10 points on 5-7 shooting despite sitting the final 5:08 of the half with foul trouble. NU clamped down on the defensive end, forcing the Bluejays to miss nine of their final 10 shots of the half.

The Huskers continue a gauntlet of top-10 teams as they travel to No. 10 Indiana Wednesday evening. Tipoff is at 7:30 p.m. (CT) and televised on BTN.