Weather: Cooler Second Half of the Weekend 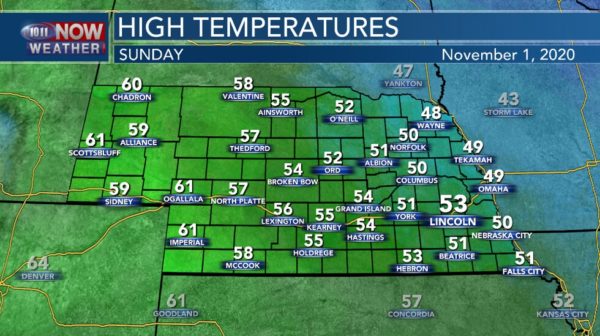 Our media partner 10/11 reported that Sunday will be cooler than Saturday thanks to a cold front that moved through the area during the first half of the weekend. It will not be as breezy. Do not get used to the cool weather though because above average temperatures return Monday.

Sunday is going to be mostly sunny and cooler with below average temperatures expected for much of the area. High temperatures should range from near 50 in far Eastern Nebraska to near 60 in far Western Nebraska and the panhandle. Northwest winds will become south-southwest at 5 to 10 mph.

As quickly as we cool down, we will warm right back up on Monday with above average temperatures across Nebraska. Afternoon high temperatures look to be in the mid 60s to low 70s. The warming trend continues Tuesday, Election Day, with highs in the low to mid 70s expected across the Cornhusker State. Average high temperatures for the first week of November are in the mid to upper 50s. The well above average high temperatures will continue through most of next week as an upper level high pressure ridge remains in control of the region. At this time, there is no chance of precipitation in the forecast through the first half of next weekend.