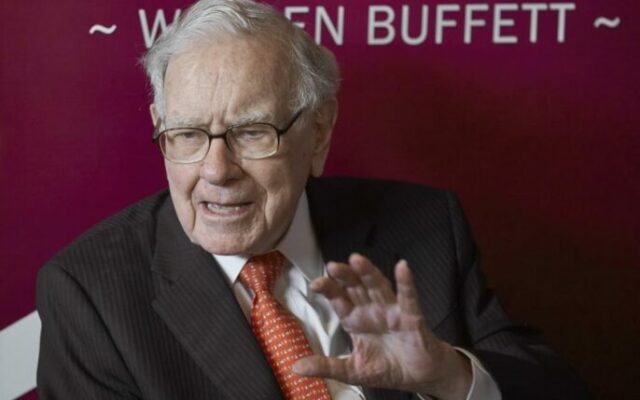 Berkshire has been investing heavily in Occidental this year, including buying up more than $1.2 billion of the Houston-based company’s stock so far this month.

After the latest purchases that Berkshire disclosed Wednesday, Buffett’s Omaha, Nebraska, based conglomerate now owns nearly 180 million Occidental shares worth more than $10 billion. That gives Berkshire control of 19.2% of the company.

But Berkshire also holds 100,000 preferred shares in the company and warrants to buy another 83.9 million Occidental shares for $59.62 apiece that it picked up in 2019 when it helped finance Occidental’s purchase of Anadarko.

Occidental shares fell roughly 2.5% Thursday to trade below Berkshire’s exercise price at $56.54, but the shares have gained more than 80% this year as oil prices soared after Russia’s invasion of Ukraine.

Berkshire has been buying stocks aggressively this year as the market fell, including investing more than $51 billion in stocks during the first quarter. It won’t reveal all its second-quarter purchases until next month.

Occidental isn’t the only oil producer Berkshire has been buying. Earlier this year, Berkshire snapped up more than $20 billion of Chevron stock in the first quarter. That made Chevron one of Berkshire’s biggest investments alongside Apple and Bank of America.

Besides investments, Berkshire Hathaway owns more than 90 companies outright, including BNSF railroad, several large utilities, Geico and a number of other insurers and an eclectic assortment of manufacturing and retail firms that includes Precision Castparts, Fruit of the Loom and Dairy Queen.