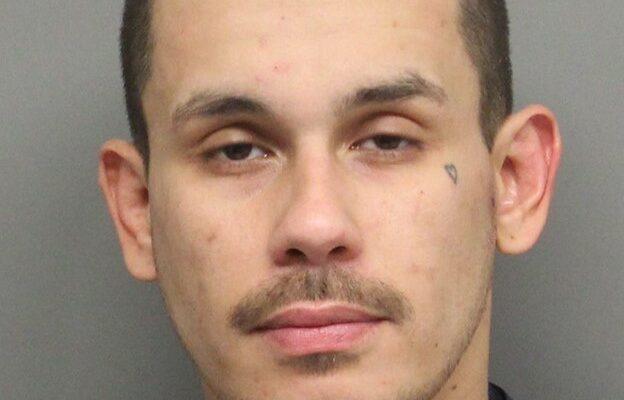 LINCOLN–(KFOR Nov. 23)–An update to a story first heard on KFOR News early Monday morning about a shots fired call in the Near South area.

On Tuesday, Lincoln Police say a 31-year-old man, later identified as Robert Rodriguez, showed up to a 26-year-old man’s home in the 1600 block of Washington Street where both got into an argument.  Officer Erin Spilker said the victim asked him to leave and Rodriguez pulled out a handgun, pointed it at him, and fired into a door.  Rodriguez fled the scene prior to police arriving.  Officers observed evidence of the shot being fired and processed the scene.  Spilker says investigators found out Rodriguez was also wanted on three outstanding warrants for narcotics, theft, and carrying a concealed weapon.

Around 1 p.m. Monday, members of the Fugitive Task Force observed Rodriguez as the passenger in a vehicle in the area of 2nd and Belmont.  As officers tried to contact Rodriguez, he ran from the vehicle and officers observed him to be carrying a handgun in his hand.  Officers observed him to discard the firearm as he was running along with a backpack.  Shortly thereafter, Rodriguez was taken into custody.  Officers recovered the handgun which matched the evidence found at the scene.  Inside the backpack, officers found burglar’s tools such as bolt cutters, Sawzall, commercial keys, headlamp, pry bar, screwdrivers, a wrench, and a flashlight.  They also located a machete with a 12 inch long blade and ammunition inside the backpack.

Rodriguez was arrested for Terroristic Threats, Use of a Weapon to Commit a Felony, Carrying a Concealed Weapon 2nd Subsequent Offense, Possession of Burglar’s Tools, and Obstructing a Police Officer.