Veterans Day Observed Virtually And In Person In Lincoln 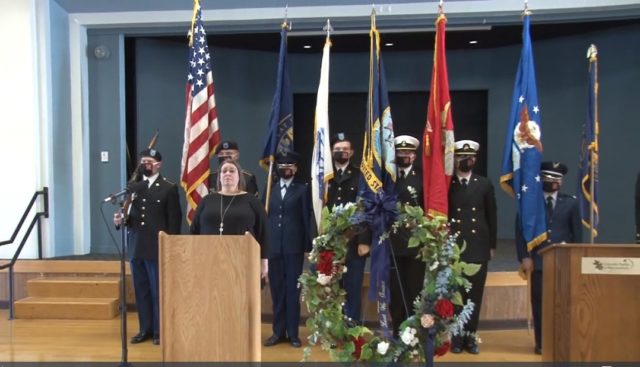 Lincoln, NE (November 11, 2020) It was a sunny and crisp morning, a few minutes after 9:30 A.M. when a group of Veterans began their annual walk from Veterans Memorial Stadium to Veterans Memorial Garden today.  They reached their destination around 10:45, slightly later than usual, according to organizer Gailen Young.  “We hit a few more stoplights than usual” Young said afterwards.

The City’s official observance, usually held in the Veterans Memorial Garden, was held before an audience of only a few people.  It was broadcast and recorded by LNK TV and can be replayed there or on the LNK section of the City Website.

In his remarks, Retired Air Force Colonel and Chaplain James Hoke said “Today we especially remember those brave men and women who sacrificed their time, talents and lives to answer the call to serve our nation both in war and peace.”  He also thanked all those who keep society running in the absence of those on military duty, such as families, and those lead communities.

Mayor Leirion Gaylor Baird said  that Veterans Day is a time for gratitude. The mayor said expressing gratitude can help our personal health and well being in the midst of all the other challenges we face.  “Today, Veterans Day, is the perfect time to tap into the deep wells of gratitude and appreciation within us because we owe so much to those who have served our Country in the Military.”

She said it’s a day to be grateful to veterans for their contributions during and after they were in the service.

“They took the lessons they learned from the Service and put them to use, serving as leaders, volunteers, and philanthropists.”

She agreed with Colonel Hoke that it’s also important to recognize the families of those in uniform.

“We can never fully repay these families for their sacrifices, but we can make sure that we never forget the names of their loved ones, their courage, and their dedication to our nation.”