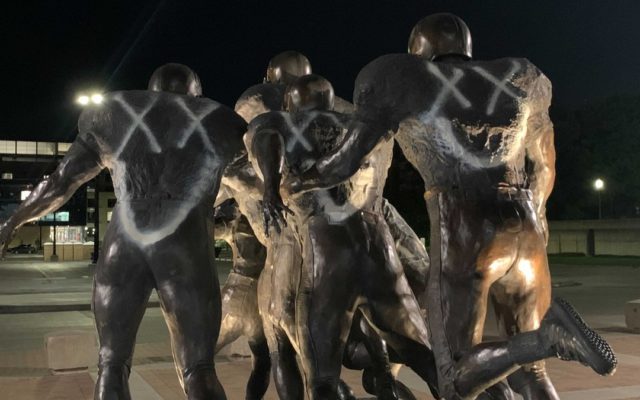 LINCOLN–(KFOR/10-11 Sept. 20)–University of Nebraska-Lincoln Police are handling a couple of vandalism cases from over the weekend, one of which included a statue outside of Memorial Stadium.

UNL Police say the famous Nebraska football “National Champions” statue, outside the entrance to East Stadium, was spray painted with graffiti around 2:30 a.m. Sunday morning. The vandalism wasn’t reported until around 10:45 a.m. According to UNLPD, damage is estimated to be around $2,000, and surveillance video from the incident is now being reviewed.

In addition, the Phi Gamma Delta fraternity near 14th and R streets was vandalized around 30 minutes later, causing $500 in damage. UNLPD believe the two crimes are related.

Anyone with information is asked to contact UNLPD or Crime Stoppers.