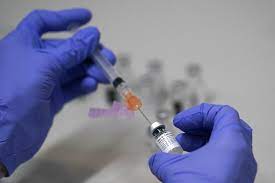 (KFOR NEWS  August 17, 2021)   WASHINGTON (AP) — U.S. experts are expected to recommend COVID-19 vaccine boosters for all Americans, regardless of age, eight months after they received their second dose of the shot, to ensure lasting protection against the coronavirus as the delta variant spreads across the country.

Federal health officials have been actively looking at whether extra shots for the vaccinated would be needed as early as this fall, reviewing case numbers in the U.S. as well as the situation in other countries such as Israel, where preliminary studies suggest the vaccine’s protection against serious illness dropped among those vaccinated in January.

An announcement on the U.S. booster recommendation was expected as soon as this week, according to two people familiar with the matter who spoke to The Associated Press on the condition of anonymity to discuss internal deliberations.

Doses would only begin to be administered widely once the Food and Drug Administration formally approves the vaccines. That action is expected for the Pfizer shot in the coming weeks.

Last week, U.S. health officials recommended boosters for some with weakened immune systems, citing their higher risk of catching the virus and evidence that the vaccines’ effectiveness waned over time.