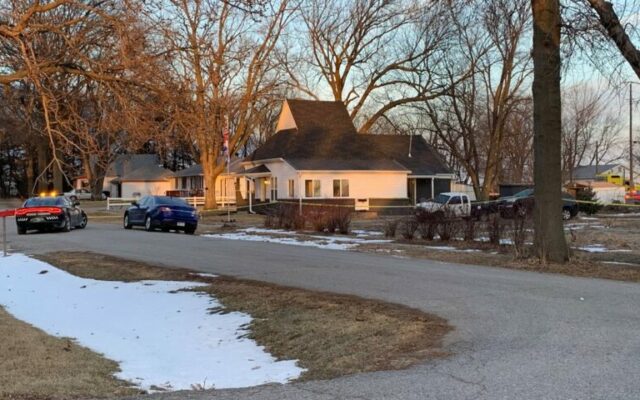 (KFOR NEWS  January 25, 2022)   The Nebraska State Patrol is investigating an incident that occurred overnight Monday into Tuesday in Adams that led to a standoff of several hours.

At approximately 9:50 p.m. Monday, the Gage County Sheriff’s Office requested the assistance of the NSP SWAT Team in response to an ongoing situation on Elm Street in Adams.  Deputies had previously responded to a domestic violence incident after receiving a 911 call from the victim.  The victim reported that her husband had hit her several times and pointed a gun at her. When he pointed the gun at her, she pushed it away, but the man fired the weapon, striking the victim in the hand.  At that point she was able to flee the home to safety.  Her children were also able to flee the home unharmed.

After the NSP SWAT Team was activated, numerous attempts were made to contact the suspect.  No contact was established, and the SWAT team breached the front door using a light armored vehicle.  Shortly thereafter, the suspect was located inside the home, deceased from a self-inflicted gunshot wound.  The entire incident lasted approximately nine hours.

The suspect’s name is being withheld at this time pending notification of next of kin.  The victim was transported to Bryan Medical Center West Campus in Lincoln for treatment of non-life-threatening injuries.  The children are with family.  No law enforcement officers were injured.

READ MORE:  http://Unemployment Rate Remains Lowest In The Nation And A Record Low For Any State