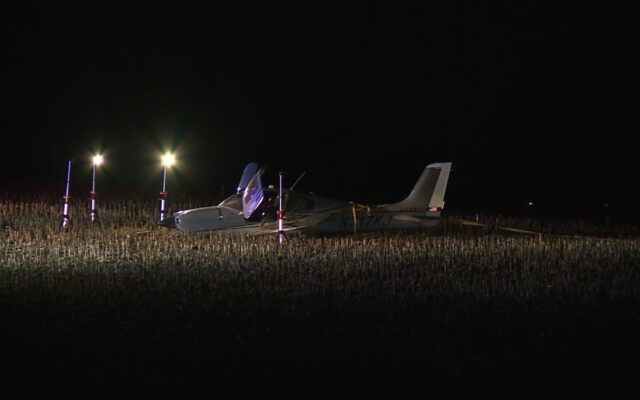 LINCOLN–(KFOR Feb. 11)–A small plane occupied by two men from Indiana did an emergency crash landing in an open field just northeast of Lincoln Thursday night.

Lancaster County Sheriff Terry Wagner on Friday said that the plane was heading to Lincoln for the night, before the occupants would proceed to Utah for a job-related visit. He said the pilot, 44-year-old Richard Phelps, reported engine problems near Plattsmouth and didn’t think they could make it to the Lincoln Airport. The problems smoothed out but started to happen again, as the plane closer to Lincoln.

Phelps was piloting the plane to land in an open area away from homes and after the plane deployed a parachute, it did an emergency crash landing in an open field near 112th and Havelock Avenue. Lincoln Fire and Rescue, Waverly Fire and Southeast Rural Fire responded to the scene. Sheriff Wagner says the pilot also dumped fuel before making the emergency landing.

Both Phelps and his passenger, 60-year-old Mark Helms, were not hurt. The FAA will be conducting an investigation into the crash.