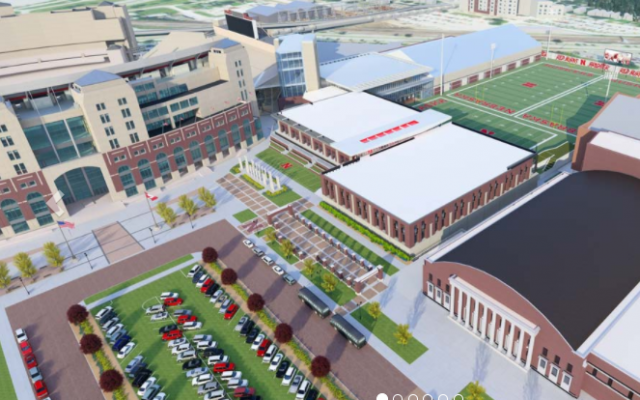 Lincoln, NE (April 9, 2021) The east side of Memorial Stadium, and the area north and east of The Devaney Center, will both look very different in the future.

Walking up to the east gates of Memorial Stadium currently provides a view overlooking the Ed Weir Track, memorializing the long time and highly revered Coach of the Husker Track Team.  That track will give way to the new headquarters building for the football program, including offices and training facilities and, later, dining facilities and study headquarters for all UNL student athletes.

The threshold for starting that program, $80 Million in private fund raising, has been reached.  The Board of Regents voted previously to allow construction as soon as the funding was in hand.  Phase one will include construction of the entire building, and finish the interior of the football portion.

Phase two, which will allow finishing the all-athlete portion, will be triggered when private fund raising reaches $100.  The remaining cost of the project will be paid for by existing Athletic Department cash funds.

Chancellor Ronnie Green said ground breaking has been scheduled for April 30, the day before the Spring Game.

Before the main portion of the building can be built, however, the Ed Weir Track needs to be replaced.  Today’s action also included approval of plans to re-locate the track just outside the Devaney Center.  It was also noted in today’s meeting that additional Devaney Center parking has been completed.

NE Senators Give Initial OK To $9.7B Budget Package