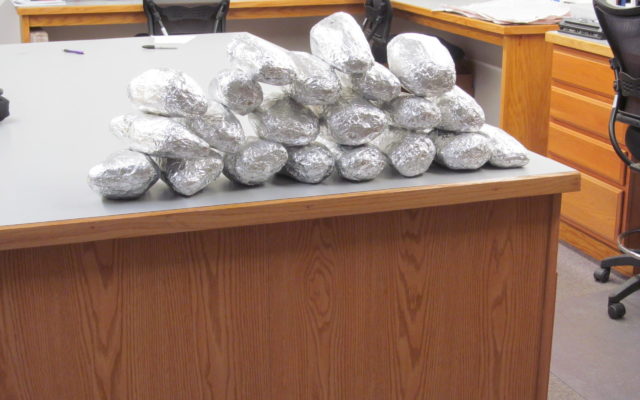 The stop occurred during Wednesday afternoon, January 29th. Sheriff Vance initiated a traffic stop on a flatbed tow truck that was hauling a Cadillac Escalade on I-80. During the stop, Sheriff Vance noticed several inconsistencies with the passenger’s story and multiple indicators of criminal activity. The passenger revealed that there was also a secondary vehicle traveling with them and that they were the owners of the Escalade.

A K-9 unit conducted a traffic stop on the secondary vehicle matching the description given by the passenger of the tow truck as well as the Escalade.

The K-9 made a positive indication of illegal narcotics on the Escalade. 21 packages of Crystal Methamphetamine weighing 27 pounds was discovered hidden in the sidewall of the vehicle. The street value is estimated at approximately $594,000. The investigation revealed that the narcotics were transported in from Juarez, Mexico and intended to be delivered in Omaha, NE.

Christian G. Gardea, 24, of El Paso, TX, Perdo A. Robles, 33, and Rex L. Kmiecik, 39, both from Omaha, were arrested for possession of a controlled substance with intent to deliver and possession of crystal methamphetamine. The tow truck driver, two children passengers under the age of five, and one female were released.