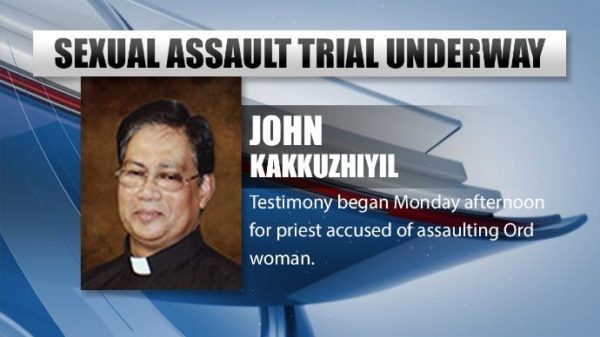 Our media partner 10/11 reported that the trial for a priest accused of sexually assaulting an Ord woman last year is underway.

Fr. John Kakkuzhiyil, former pastor in Ord, is charged with first degree sexual assault. 14 people, including two alternates, were chosen Monday to serve on the jury for the trial. The 14 include three men and 11 women. Testimony began late Monday after jury selection.

Kakkuzhiyil was arrested in early January 2019 after a month-long investigation by the state patrol into a claim by an Ord woman who said the priest raped her at his home in late November. Court records indicate that the woman also claims Kakkuzhiyil gave her a couple of drinks beforehand, that she blacked out, and when she awoke she was naked and the priest was performing a sex act.

Kakkuzhiyil pled not guilty in Valley County District Court in Ord on February 18, 2019. If found guilty on the felony sexual assault charge, Kakkuzhiyil could get up to 50 years in prison. Up until late 2018, Kakkuzhiyil was parish priest in Ord and Burwell.

In a January 2019 statement, Grand Island Diocese Bishop Joseph Hanefeldt said he informed parishioners in Ord and Burwell December First that the priest was struggling with alcoholism and depression.

10/11 has released the full statement from the Grand Island Diocese:

“Bishop Hanefeldt has learned today, January 2, 2019, that Fr. John Kakkuzhiyil, a priest of the Diocese of Grand Island, has been placed under arrest by the Nebraska State Patrol in Grand Island and charged with first-degree sexual assault of an adult.”

On December 6, 2018 Fr. Kakkuzhiyil entered the CHI St. Francis Drug and Alcohol Treatment Program and was dismissed from there on January 2, 2019.

Court records indicate that a Valley County District Judge issued a protection order against Kakkuzhiyil after the woman reported the sexual assault.