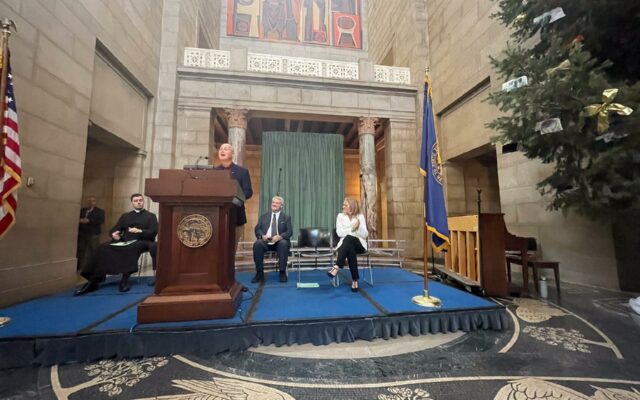 Lincoln, NE (December 12, 2021)  Nebraska’s official State Christmas Tree is now standing tall in the State Capitol Rotunda.  It was lit today in a 2 PM ceremony.  After the presentation of the U.S. and State Flags, the National Anthem, an invocation, the music of two choirs, and acknowledgment of the tree’s donor, Governor Pete Ricketts delivered his Christmas remarks.

He said with trees, decorations and special gatherings, it’s easy to forget the true purpose of the season.

“That this is a season of rejoicing.  That we want to be thankful for all the wonderful gifts that we’ve been given.”

Ricketts  said Christmas should be seen as a time of hope for solutions to the world’s problems, ranging from the pandemic to Russian troops massing on the Ukrainian border to Chinese fighter planes flying over Taiwan.

“We can be concerned about what’s going to happen, and how’s it going to impact us here in Nebraska.  But, through this all, God gives us a message of hope.”

He said Christmas is a time to give back to others, especially those who are around us.

“In this Christmas season, we want to thank not only the people who put this on, but all of our friends and family and neighbors for doing things for us throughout the year; to return back all these wonderful gifts we’ve been given.”

The Capitol Commission, in charge of obtaining and decorating the tree each year, said it was donated by Gabriel Spargen of the southwestern Omaha suburb of Millard.  Spargen said the tree was “about 20 feet tall when I bought my house” and added that he contacted the Capitol Commission because he wanted to donate something to the State.

Information supplied by the Commission indicated the Douglas Fir is “30 feet tall.”

In his remarks, Governor Pete Ricketts was dubious.

“I think it’s taller than 30 feet.  This has got to be one of the taller trees that we’ve had here, at least that I can remember.”

You can see it for yourself.  It is on display in the Rotunda during the time the Capitol is open each day.

The ornaments on the State Tree were designed and made by artists across the State during the recent 150 year anniversary celebration in 2018.  They can be seen online at ne150.org/ornament.