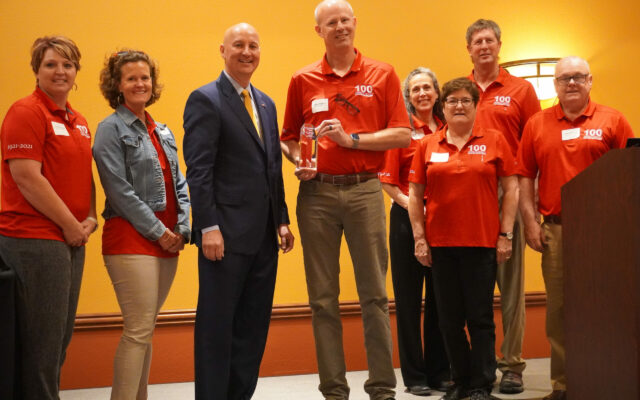 The award recognizes Nebraska manufacturers that implement innovative ways to conduct business through the use of products, processes, technologies and strategies. The companies were honored today at the annual NE Chamber Manufacturing Summit.

“Nebraska manufacturers have been answering the call to solve America’s toughest challenges for decades. Hughes Brothers and BD are two shining examples of that ingenuity at work,” said Bryan Slone, NE Chamber president. “We’re so proud to have these companies operating and expanding in our communities.”

Headquartered in Seward, Hughes Brothers, produces electric transmission and distribution products to reliably transport electricity across the U.S. Products include wood, metal and fiberglass framing and fixtures, engineering services and even storm restoration kits, which have proven critical during floods, wildfires, hurricanes and a derecho.

Hughes Brothers built Nebraska’s first 115kV transmission line from Columbus to North Platte in the early 1930s, which set it up for a national role in the Rural Electrification Act during the Great Depression. Today, the company’s commitment to quality and next-era engineering make it a leader in electrical distribution solutions, with 900,000 customized products.

“It’s a big custom job shop. That’s how we started, and that’s what we still do today,” said John Hughes, president of Hughes Brothers.

The company’s 275 employees celebrated its 100th anniversary October 15, opening a museum to the public featuring the history of electric transmission in Seward.

BD began operations in Nebraska after World War II in response to U.S. government initiatives to diversify manufacturing geographically throughout the nation.

The Broken Bow facility is among one of the largest producers of blood collection devices to support critical care and clinical applications around the world. Operational since 1960, the facility has expanded to 300,000 square feet and 625 associates.

“The success of our company is measured on patient outcomes. We provide technology to advance healthcare for patients, clinicians and doctors,” said Dave Berge, Broken Bow plant manager. “One of the things we’re most proud of is being engaged in the fight against COVID-19.”

BD Broken Bow continues to grow and hire new associates to meet the demands of the growing market, and has expanded over the last several years, adding a new state-of-the-art additive laboratory and increasing warehouse capacity through the lease of 30,000 square foot facility. The company currently employs 3,500 Nebraskans between four facilities in Broken Bow, Columbus and Holdrege.

Nebraska is home to more than 1,500 manufacturers employing 100,000 workers. One in 10 jobs is in manufacturing. The industry contributes more than $13.5 billion annually to Nebraska’s Gross State Product. Average annual wages in manufacturing exceeded $67,200 in 2019, the most recent year data is available.