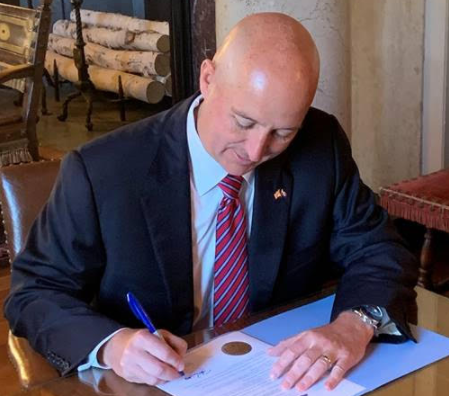 LINCOLN, NE (September 16, 2021) – Governor Pete Ricketts has signed an executive order declaring that the POW/MIA flag must be displayed at all State Buildings that display the flag of the United States of America.

“During my administration, the State of Nebraska has worked to become the most veteran- and military-friendly state in the nation,” said Gov. Ricketts.  “Flying the POW/MIA flag at state buildings is another significant way that we can honor our brave military men and women, especially those who never returned home.  With today’s executive order, we proclaim that Nebraska will never let our missing service members be forgotten.”

The Defense POW/MIA Accounting Agency (DPAA) estimates that more than 80,000 American service members remain unaccounted for since World War II.  The DPAA Offutt Laboratory recently played a significant role in identifying our nation’s missing heroes.  In July of 2020, the remains of 28 unidentified service members from a C-17 Globemaster III were transferred from the European theater to be analyzed by the DPAA Offutt Laboratory team.

Full text of the executive order can be found here.