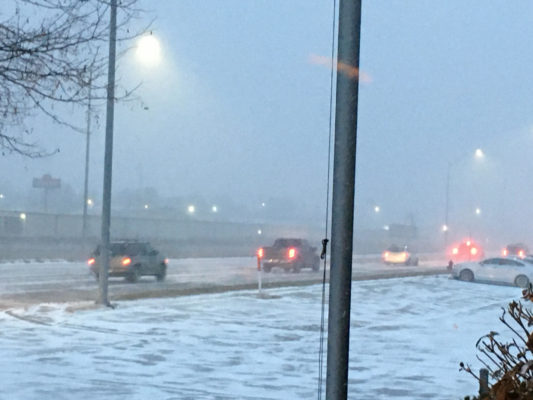 Lincoln, Nebraska (January 21, 2020) A winter weather advisory goes into effect at 6 pm Tuesday night and will be in effect until Noon Wednesday.

The National Weather Service says that mixed precipitation is expected. That could include a total snow accumulations of one to three inches a light ice accumulation, and winds gusting as high as 35 mph. The advisory includes portions of east central, northeast and southeast Nebraska and southwest and west central Iowa.

Drivers can plan on slippery road conditions through tonight, and which could impact the morning commute.

From last weekend’s storm, Lincoln’s Transportation and Utilities Department is working to stay ahead.

Sand and gravel are going down, and sunshine and temperatures in the 20’s are beginning to break up the unprecedented ice pack on many of Lincoln’s residential streets, but most are still slippery and slow going.

Interim Transportation and Utilities Director Tom Casady said that all available spreaders and plows had to work the arterial and bus routes this past weekend. “Since every single residential street in Lincoln was under the same conditions, we had to prioritize the ones that are most important, arterials and bus routs,” explained Casady.

Casady said sand and gravel are being spread Tuesday, but with 18 spreaders and 3,000 lane miles in the city, progress is slow. “There simply is just not enough spreaders to hit all of the residential streets in a day or even two days.”

Casady added crews will have to shift their priority back to the arterial and bus routes again tonight with more snow and ice expected.