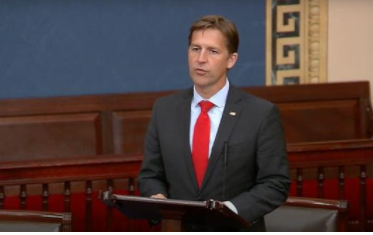 His speech read as follows:

I rise today to speak in memory and in honor of Corporal Page, a 23-year-old Marine from Nebraska. He gave his life defending Americans and our allies in the chaos of the Kabul airport as many tried to escape the capture of Afghanistan by a band of blood-thirsty terrorists.

Corporal Page is one of thirteen heroes who gave his life that day defending the Kabul airport in the midst of that chaotic evacuation. The American people owe these men and women a debt of gratitude that we will never be able to repay. Corporal Page lost his life while honoring our nation’s promise that we would leave no one behind. He and his fellow Marines never wavered. They didn’t fail in executing their duty. They were given an impossible mission and these men and women fought to the end.

It is now our duty to stand with these families – the families of each of these thirteen and to honor their sacrifices.

Last Friday, in Omaha, thousands and thousands and thousands of Nebraskans lined the streets to give Corporal Page a hero’s welcome as his body was returned home. And as his family said: “Our hearts are still broken, but we are the lucky few who know what it is to have the entire city of Omaha give you a hug.”

Corporal Page was a Nebraskan who made his family, and his state, and his entire nation proud.

He left for boot camp shortly after graduating from Millard South High School, and he was proud to serve in the 2nd Battalion, 1st Marine Regiment with his fellow Marines. He enjoyed playing hockey – one of my kids played hockey against him. He went to Millard South High School but he played hockey for Westside, and the Fremont team that my kids play on got to compete against him and know him as a competitor. He enjoyed hunting, he enjoyed being in the outdoors, he especially enjoyed the water. He was a boy scout in Troop 331. He loved spending time with his family and friends. He was a member of his local church, the Lutheran Church of Millard – St. Paul’s Lutheran Church of Millard – and like so many Nebraskans he was a diehard sports fan – his favorite team being the Chicago Blackhawks.

Corporal Page gave the last full measure of devotion to his country. His mission was clear: In the chaos of Kabul, Corporal Page was there to protect and save lives. That’s exactly what he did. Marines held the line and pulled both Americans and our Afghan allies to safety. Marines pulled children out of hell, gave them water, and got them to safety. Corporal Page gave his life so that others would live.

Nebraskans will never forget him.

Heroes like Corporal Page didn’t fail us and we can’t forget them. We must keep our promise to honor his family, to teach our families about their sacrifice, and to strive to live lives of gratitude.

It’s times like this where we rediscover the heart of our country; communities that pull together  – as happened last Friday and will happen again this Friday at his funeral at St. Paul’s Lutheran – we pray together; make meals for each other; and we are reminded of the sacrifices so many families have made.

Today and in the days to come, we in Nebraska will honor Corporal Page and we across this country will honor the thirteen that fell that day.

Your sacrifice is a debt we can never repay.