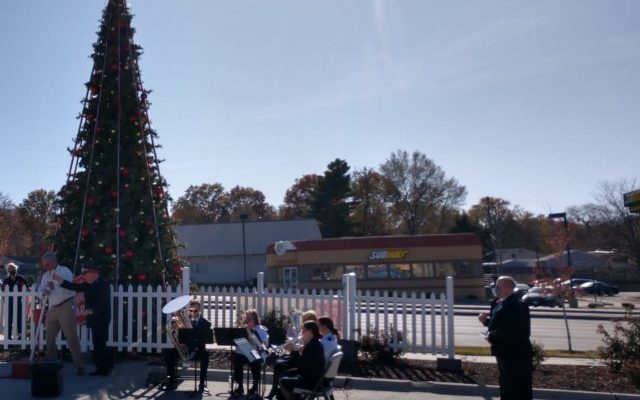 Lincoln, NE (November 6, 2020)  At least one thing will be normal during 2020…The Salvation Army kicked off its annual tree of lights campaign today.  Volunteer Campaign Chairman Mark Whitehead and Major Mark Anderson, Head of Lincoln’s Salvation Army, threw the switch at Noon, lighting the giant tree at 52nd and “O” Streets, as the Salvation Army Band played “Jingle Bells”.

Whitehead announced that the campaign has set a goal of $625,000, slightly lower than last year’s goal, because of the difficult economic times many people are facing.  He also said, however, that “Angel Donors” have established a matching program.  Each $20 bill dropped in a red kettle will be matched.

Major Anderson said the campaign will be as normal as possible.

“We are open in most locations that we were open last year, with bell ringers ringing away.”

Anderson said donations can also be made directly.

“For those places where we can’t ring this year, we’re simply asking individuals to stop by with a donation, or to send one in to the Salvation Army, at 2625 Potter Street.”

New technology is also making it possible for shoppers to make donations even if they don’t have any change for the kettle that they pass by.

“You can go to one of the Salvation Army kettle locations, there’s a place you can tap your phone, you can use the scanner code, and there’s just a lot of ways you can help this year.

The Tree of Lights Campaign traditionally makes up about half of the local Salvation Army’s budget for the coming year.  Anderson said even though the goal has been lowered, he hopes the Community will be generous enough to fund all the aid and regular programs that the Salvation Army traditionally operates.