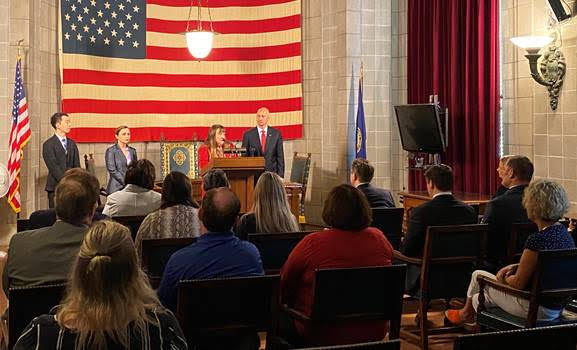 LINCOLN, NE (June 30, 2021) – Governor Pete Ricketts hosted a proclamation ceremony to honor and remember the millions of victims of communism.  During the event, the Governor issued a proclamation to designate July 2021 as “Victims of Communism Remembrance Month” in Nebraska.  An estimated 100 million people died from political purges, religious persecutions, mass starvations, and other crimes against humanity carried out by communist regimes such as the Union of Soviet Socialist Republics (USSR) and the People’s Republic of China.

In his remarks, Governor Ricketts reminded Nebraskans of the hundreds of millions of people who continue to live under communist regimes that curtail freedoms and lack respect for human rights.  The Chinese Communist Party, in particular, is holding ethnic Uyghurs in internment camps, violating the religious freedom of the Chinese people, and quashing political dissent in Hong Kong and elsewhere.  The Governor reaffirmed Nebraska’s commitment to be a home for people from around the world seeking to live, work, and worship freely according to their conscience.

Video from the Victims of Communism remembrance ceremony is available by clicking here.

The proclamation designating July 2021 as “Victims of Communism Remembrance Month” in Nebraska is available by clicking here.