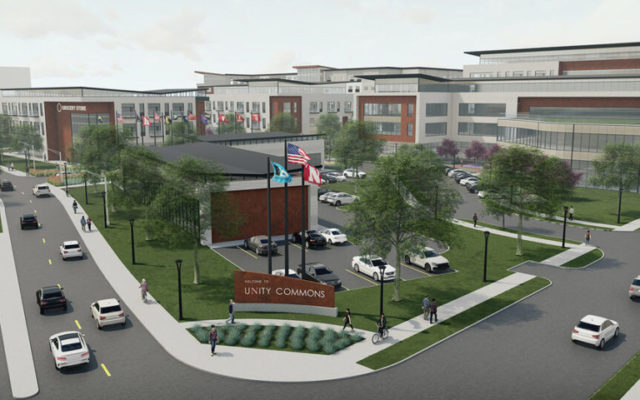 (KFOR NEWS  September 28, 2021)   The University of Nebraska–Lincoln community would gain housing for older Huskers under a redevelopment proposal selected for a 16.49-acre university-owned tract at 2100 Vine St.

As proposed by a team led by Woodbury Corporation of Salt Lake City and WRK Real Estate LLC of Lincoln, the “Unity Commons” mixed-use development would be anchored in part by apartment buildings geared for retired Nebraska alumni, emeritus faculty, retired staff and other seniors. The public-private partnership also would create housing and other resources for Lincoln’s international community, commercial space and retail stores, among other amenities.

The “Unity Cultural Center” would serve as the district’s front door from Vine Street. Retail stores would serve both campus and nearby neighborhoods.

“This proposal offers many exciting new opportunities for the university,” said Chancellor Ronnie Green. “Alumni and others can ‘come back home’ to partake in campus life. Faculty and students will have nearby work and research opportunities. I anticipate new retail offerings in an area where they’ve been lacking. New resources will fill unmet needs of our international community. And,this development will help unite campus with the Antelope Valley and the Prem Paul Research Center at Whittier School.”

It is increasingly common for universities to offer senior-living amenities near their campuses. More than 70 universities across the United States benefit from public-private partnerships with senior living providers, with seven of those in the Big Ten conference, the development team reported.

Other partners in the $175 million redevelopment plan are Omaha-based Lockwood Development, and WELL Senior Living.

A fourth-generation, full-service real estate management and development company, Woodbury Corporation’s relationship with the university began over a decade ago while developing and master planning Nebraska Innovation Campus. Woodbury owns and operates the Courtyard by Marriott Lincoln Downtown/Haymarket Hotel, which is considered a legacy investment for the company.

WRK develops, owns and operates many properties throughout Lincoln, including the Hudl headquarters, Hyatt Place Hotel and Railyard Entertainment District in the West Haymarket.

“The history we have with UNL and knowledge of the city, along with our local partners, gives us an advantage as we work to make Unity Commons a gathering place for the community,” said Jeff Woodbury, senior vice president of development and acquisitions at Woodbury. “We are continually looking for more opportunities with the university and within the city of Lincoln. We are committed to this community.”

The Woodbury and WRK proposal was one of two submitted in response to a request for proposals the university issued in April 2021.

“Our concept is centered on establishing an international-tailored, intergenerational and unity-focused neighborhood that allows for a live-work-play environment,” Will Scott, WRK managing director, said in their letter to the selection committee. “Moreover, the project aligns UNL with other Big Ten institutions in bringing many inclusive amenities that currently do not exist on campus.”

“The developers’ preliminary analysis indicated a need for additional independent living, assisted living and memory care units in this part of Lincoln,” said Bill Nunez, vice chancellor for business and finance. “Other data showed university-based senior living attracts more residents from outside a 500-mile radius. We think former faculty and staff, loyal alumni and lifelong learners looking to stay active and be in proximity to the university will be among those who would be attracted to this development.”

Developers plan to consult with college deans, leaders of city cultural centers and the Osher Lifelong Learning Institute, among others, to investigate ways the project can serve multicultural, intergenerational and academic purposes. The Cultural Centers of Lincoln organization has expressed interest in working with the university and the developers.

The Unity Cultural Center is described as a place for groups of all faiths and cultures to come together to celebrate, mourn, think, present, discuss, pray and enjoy. Under consideration is a space where OLLI educational programs for seniors could be presented. The district also is envisioned as a source of internships, research and other experiential learning opportunities for students and faculty.

Developers also propose to open the parcel’s access to campus with bike trails that would connect with and extend the adjoining Mo-Pac and Antelope Valley Trails.

The university has owned the parcel, valued at $5.9 million, since 2003, when it was acquired from former owner Textron. The property would be leased on a long-term basis from the university for a percentage of the revenues it generates.

Details of the agreement will be negotiated over coming weeks, with the proposal to go before the University of Nebraska Board of Regents in early 2022 for final approval. Construction is expected to begin in six to eight months, after the master plan is refined and the contract discussions continue. The project’s first phase is estimated to be complete within two years.

READ MORE:   Mayor Gaylor Baird Looks To Road Ahead In State Of The City Address