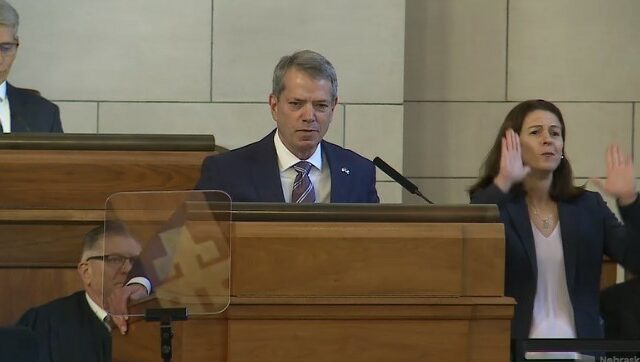 Lincoln, NE (January 5, 2023)  Jim Pillen became Nebraska’s 41st Governor today.  A Veterinarian and Pork Production Executive from the Columbus area, Pillen resigned a seat on the University of Nebraska to move to the Governor’s Office after winning the November election.  He succeeds Pete Ricketts, who served two terms as the State’s top executive.

Pillen showed strong emotion as he saluted the state.

“We live in a very special place.  Where the son of a tenant farmer and seamstress can get a good education, go to college, receive a Doctorate in Veterinary Medicine, raise a family, build a business, and be elected to lead the greatest State in America.”

Pillen made it clear that he believes Government has a legitimate but limited function:

“Prosperity comes from the private sector.  Families, ranchers, business leaders who work hard, innovate, and take risks.  We don’t look to Government for our rights and freedoms.  Those are innate, God given.”

Government, he said, needs to do its job efficiently and then “get the heck out of the way”, adding “we expect low taxes, carefully controlled spending, transparency and accountability.  We expect the business of the people to be handled like business.”

The State’s Chief Justice, Mike Heavican, administered the oath of office to Pillen, Lieutenant Governor Joe Kelley, and all newly elected State Officials in a ceremony in the Legislative Chamber.