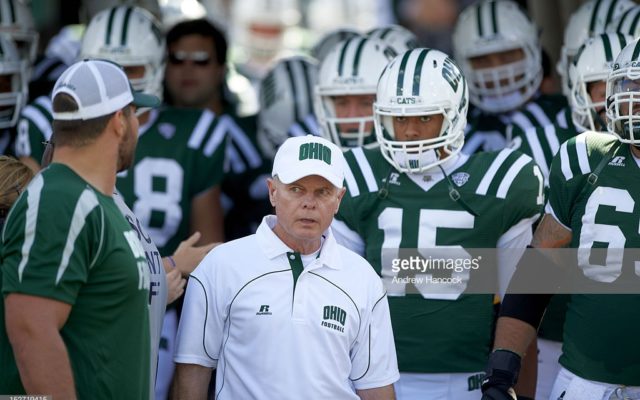 Athens, OH—(Ohio Athletics July 14)–Ohio University Head Football Coach Frank Solich announced today that he is stepping down from his position to focus on his health, after an unprecedented successful sixteen seasons leading the Bobcats, which included eleven bowl appearances, four Mid-American Conference East titles and a Top 25 ranking.

“After fifty-five years in coaching, including 16 at Ohio University, it is time for me to step away to focus on a cardiovascular health issue,” said Solich, a former Home Depot National Coach of the Year (1999) and MAC Coach of the Year (2016). “I’ve appreciated the support of Bobcat fans over the years, and I know they will continue to support Coach Albin.   After working directly with Tim for 21 consecutive years, including six at the University of Nebraska, it’s clear to me he is prepared to continue our work and move the program forward.  I am happy for Tim and his family.”

Solich owns a career coaching record of 173-101. His 173 overall wins rank as the fourth most among active NCAA FBS head coaches. He is the winningest head coach in Mid-American Conference history with 115 overall victories while his 77 conference-only wins rank second to former Central Michigan head coach Herb Deromedi’s 90. His 16 years of service match Deromedi’s (1978-93) for the most in MAC history. Ohio is 115-82 during the Solich era. His 115 victories are the second-most in program history behind Don Peden (121; 1924-46). Ohio has gone 77-46 in conference play since Solich’s arrival in Athens in 2005.

“We are so grateful for all that Coach Solich has given to Ohio University and, especially, to our football program,” said Cromer. “He has elevated our program to incredible heights and his legacy rests not only in the on-the-field accomplishments, but also in the lives of hundreds of Bobcats who learned about football—and life—from Coach. I am excited that he has agreed to serve as a close advisor to me and as a resource to our students, coaches and staff.  We look forward to opportunities in the coming year to show our appreciation for Coach Solich and to celebrate his legacy.”

Ohio has had a run of 12-straight non-losing seasons that has included 11 winning campaigns and six years with at least nine victories — including a 10-win campaign in 2011. The 2012 season began with the Bobcats earning a signature win at Penn State, upsetting the Nittany Lions by a score of 24-14. Ohio captured division titles in 2006, 2009, 2011 and 2016. Solich led the Bobcats to 11 of their 13 bowl appearances and the first five bowl victories in program history, with back-to-back wins in the 2011 Famous Idaho Potato Bowl and ’12 Independence Bowl and back-to-back-to-back victories in the 2017 Bahamas Bowl, ’18 DXL Frisco Bowl and ’20 Famous Idaho Potato Bowl (2019 season).

“Coach Solich has been a deeply valued part of the Ohio University family not only for his record on the field but also for his support of student athletes and their success at OHIO and after graduation,” said Ohio University President Hugh Sherman. “I’m thankful for his leadership and for the continuity that Tim Albin will bring as he steps into the role of head football coach. He knows our program and our players and has been a significant part of the team’s success.”

Albin joined the Ohio Football coaching staff as offensive coordinator in 2005, reuniting with Frank Solich after four seasons together at Nebraska. The 2021 season will mark Albin’s 17th year in Athens. Since his arrival in Athens, Albin has produced offensive units that have consistently ranked among the top of the Mid-American Conference. He also has directed an offensive attack that has practically rewritten all of Ohio’s rushing, passing records, and scoring records. In the past 10 seasons, Albin’s offensive units rank No. 1, 2, 4, 5, 6, 7, and 8 on the Ohio all-time Top-10 single season scoring list. The Bobcats 368 points in 2018 rank fourth on the all-time list.

“We are so fortunate to have someone with Tim’s experience, character and vision already within our program,” said Cromer. “There are few situations where a transition can be as seamless as this one. Tim has been an integral part of the sustained success of OHIO football and with his leadership we expect to maintain our competitive pursuit of MAC Championships, even as he establishes his own imprint on the program. We are excited for Tim to lead our football program.”

Albin spent the 2004 season as offensive coordinator and running backs coach at North Dakota State, helping the Bison to an 8-3 record and No. 25 national ranking in their first season at the Division I-AA level. NDSU finished the season averaging 378.5 yards of total offense, including 192.4 on the ground, and had four offensive players named first-team All-Great West Football Conference. Albin served with Solich at Nebraska from 2000 to 2003. He started with the Cornhusker program as a graduate assistant, a position he held for three seasons before being promoted to running backs coach and passing game coordinator for the 2003 season. Prior to his stint at Nebraska, Albin was the head coach at Northwestern Oklahoma State for three seasons, winning the NAIA national championship in 1999 with a 13-0 record. He was named NAIA Football Coach of the Year by Rawlings and American Football Coach Magazine as the Rangers recorded their first undefeated season in history.

“It is truly an honor to lead the Ohio University football program and I want to express my gratitude to President Sherman and Director of Athletics Julie Cromer for their belief in me,” said Albin. “I am forever indebted to Coach Solich for all that he has offered me and taught me through the years, and I know he will always be part of our program.  Our team will provide an unmatched student-athlete experience both on and off the field and we will graduate young men prepared to succeed in life.  With the help of our incredible staff I know great things lie ahead, and our work continues.”