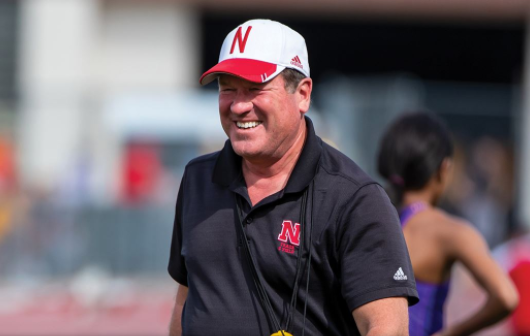 Under Harris, the Huskers’ cross country programs have made steady climbs up the Big Ten standings. The men’s team has improved their final standing each of the last five years, finishing fifth this past season, their best-ever finish in the Big Ten Conference. The women’s team has improved their finish every year since 2016, reaching ninth place this year. George Kusche also became Nebraska’s first-ever Big Ten cross country individual champion in 2021, and Erika Freyhof became the top Husker female finisher (sixth place) in the Huskers’ Big Ten Conference era.

“I am pleased with the success of our program over the last 10 years, especially the men’s cross country program moving up in the standings every year in the Big Ten since 2016,” Harris said. “It is never easy in this league, but five straight years of steady climb is an accomplishment I am proud of. George Kusche winning the Big Ten cross country individual title this year, and Erika Freyhof becoming our first All-Big Ten First Teamer on the women’s side were fantastic achievements for our cross country program. On the track, our distance runners accomplished many top-10 times throughout the years and have been competing for more podium spots at Big Ten Championships in recent seasons. I believe our cross country and distance programs are in a good position moving forward to continue progressing in the Big Ten.

I’m thankful to Coach Pepin and the University of Nebraska for not one, but two stints as a coach at this great place. I want to thank my wife, Kathy, and all of my family and friends for their continued support during my 44-year coaching career – 17 of which were at Nebraska. It has been an unbelievable journey, and of course I also owe a lot of that to all of the student-athletes I’ve been blessed to coach throughout the years. I want to thank each and every one of them for their hard work and dedication.”

Additionally, Harris’ athletes have won four Big Ten individual titles since 2012, and the 2012 distance medley relay squad earned first-team All-America honors with a seventh-place finish at the NCAA Indoor Championships. Miller, who was part of that DMR squad, was also a second-team All-American in the outdoor 1,500m.

Most recently, Harris guided Kusche to three Big Ten indoor medals over the last two years and USTFCCCA second-team All-America accolades in the mile in 2021 after a 10th-place finish at the NCAA Indoor Championships. He set school records in the mile and 3,000 meters over the last two seasons, and Kusche becoming the first Husker to run a sub-4:00 mile at the Bob Devaney Sports Center in front of a standing-room-only crowd in 2019 will go down as one of Harris’ career highlights.

“I am very happy for Coach Harris and the fact that I think now he’s going to finally get some time to enjoy a lot of the things he likes to do,” Pepin said. “He has certainly made a strong contribution to our program. He did a great job and is a terrific guy. He’s very well-liked by everybody and we’re really going to miss him. At the same time, I know he’s looking forward to retirement and we want to wish him and his wife the very best.”

Harris coached NU’s middle distance runners and the men’s sprinters and hurdlers for seven years before becoming the head cross country and track and field coach at Emporia State in 1992. In his first stint at Nebraska, Harris coached many student-athletes to records that still stand, including the women’s outdoor 800m (Sharon Powell), the men’s outdoor 400m (Ken Waller), the 1,000m (Dieudonne Kwizera), the 400m hurdles (Mark Jackson) and the men’s 4x400m relay.

As the Hornets’ head coach for 19 years, Harris was named MIAA Coach of the Year 11 times and brought Emporia State to the top of the Division II ranks, as the men’s squad finished fourth at the NCAA Outdoor Championships in 2011. Emporia State won 10 MIAA team championships under Harris and had 20 runner-up finishes. In 1999 he became only the third coach to lead both the men’s and women’s teams to MIAA outdoor titles in the same season. The ESU women earned the school’s first top-four finish nationally with a fourth-place finish at the NCAA Outdoor Championships in Emporia in 1999. It was the second of three national championship meets at Witten Track/Welch Stadium held under Harris’ leadership.

One of the most respected coaches in the track and field community, Harris was the first non-Division I president in the history of the USTFCCCA. Harris served in numerous leadership roles within the USTFCCCA and earned two prestigious awards. He was named the 2001 USTCA Women’s NCAA Division II National Outdoor Coach of the Year and was most recently awarded the Jimmy Carnes Distinguished Service Award by the USTFCCCA. He is the former Division II Executive Council Chairman and was the first non-Division I President of the USTFCCCA, serving in that role from 2005-06 and leading the association through its reorganization in 2005.