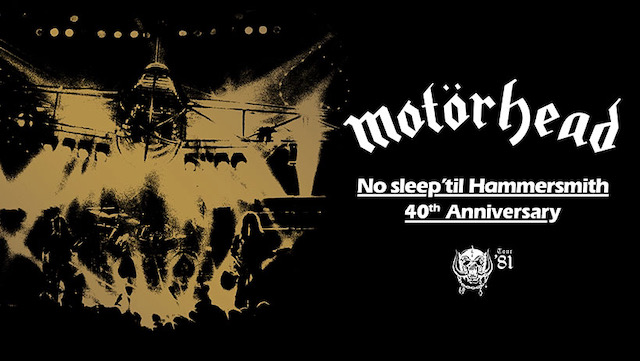 As we enter May, in a few days, I’m preparing for the Motorhead holiday know as The 8th Of May. The 8th of May is the day fans celebrate the music and passing of  Lemmy Kilmister, who died in December 2015.

In 2020 Motorhead fans celebrated the 40th anniversary of Ace of Spades. The box set was  amazing. Everything a fan could want.

Now Motorhead fans can get the live album to end all live albums, the undisputed champ No Sleep ‘Til Hammersmith to celebrate the of the release The new deluxe editions. The box set contains a  hardback book-packs in two CD and triple LP formats, featuring a new venue demolishing remaster of the original album, bonus tracks and the previously unreleased – in its entirety – concert from Newcastle City Hall, March 30, 1981, the story of the album and many previously unseen photos. Also, the album will be released as a four CD box set of all three concerts recorded for the album released in their entirety for the very first time and primed to gleefully shatter what’s left of your grateful eardrums.