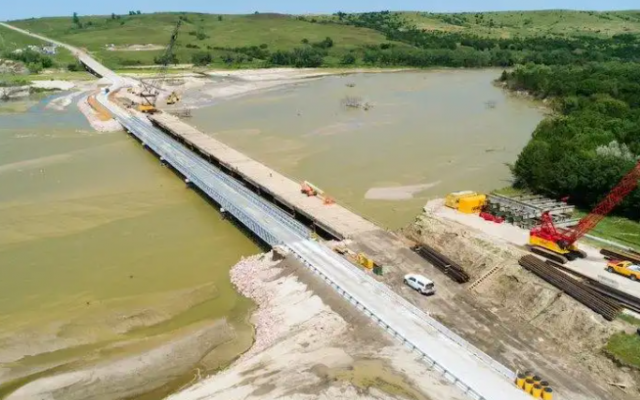 Nineteen months after catastrophic flooding washed out the bridge, 1,300 feet of embankment, and roadway pavement, the Niobrara River Bridge reopened to traffic thanks to a collaborative effort that sped up planning, permitting, design, and construction. Until the crossing was restored, motorists were forced to take detours of up to 127 miles to reach businesses, schools, and medical care.

Overshadowing the project was the initial uncertainty surrounding the potential for near- and long-term erosion, and their effects on the once-stable landscape. The project team’s environmental specialists analyzed the channel’s dramatic instability and provided specific forecasts for the river’s behavior until flow levels and velocity returned to normal. This provided the certainty necessary for bridge engineers to design a temporary crossing to restore traffic, and a permanent structure that can withstand long-term changes in the river basin.

The project is eligible for additional honors as part of 173 entries this year representing engineering excellence from throughout the nation and the world. Judging for the awards program—known industry-wide as the “Academy Awards of the engineering industry”– took place in February and was conducted by a national 20-member panel of built-environment leaders, along with experts from government, media, and academia. Award criteria focused on uniqueness and originality, technical innovation, social and economic value, and generating excitement for the engineering profession.

Recognition of all award winners including top winners—20 Honor Awards, 16 Grand Awards, and the prestigious “Grand Conceptor Award” for the year’s most outstanding overall engineering achievement—will take place during the 2021 Virtual EEA Gala, to be held Thursday, June 17, 2021.

Protections From Financial Scams Beefed Up For Older Nebraskans