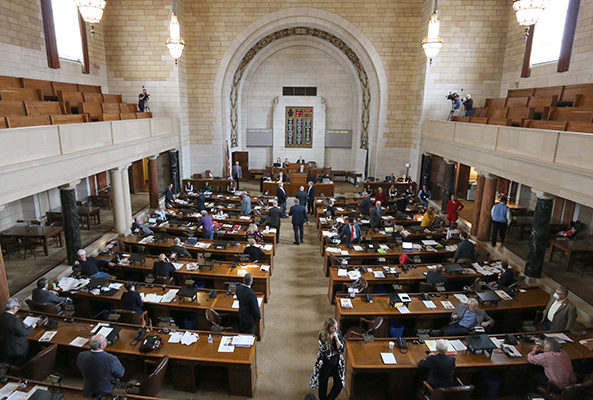 (AP) Lincoln, NE  (January 4, 2023)  The Nebraska Legislature began its new session Wednesday with several new members, a new incoming governor and nearly $1 billion in cash. But it faces some of the same perpetual issues over the next five months, including a likely fight over proposed abortion restrictions and what to do with that surplus money.

The session opens with a record 18 women state senators among the Legislature’s 49 members. Nebraska has the country’s only one-chamber legislature and is officially nonpartisan, although lawmakers tend to identify as either Republican, Democrat or independent.

That split looms large over the issue of abortion. A Republican-led effort last year to pass a near total abortion ban fell two votes short of garnering the 33 needed to overcome a filibuster. While it would seem that opponents of the ban retained enough seats to filibuster it again this session, some abortion-rights advocates say there’s no guarantee that the alliance of 17 lawmakers that filibustered the ban last year will hold this session.

“I expect an abortion ban bill, and we will fight like hell, but Nebraskans should emotionally and strategically prepare for it to pass,” Sen. Megan Hunt of Omaha said in an interview last month.

Lawmakers will be working under a new executive administration beginning Thursday, when Republican Jim Pillen is sworn in as governor. Pillen replaces the departing Gov. Pete Ricketts, who was banned by term limits from seeking another term and is widely expected to be named by Pillen to replace Republican U.S. Sen. Ben Sasse, who is resigning from the U.S. Senate next week to become president of the University of Florida.

Little is expected to change in the transition of power from one man to the other, as Ricketts both endorsed and contributed heavily to Pillen’s campaign.

Among some of Pillen’s priorities for the new session are cutting taxes and his push to change Nebraska’s school funding formula to a per-student basis — a move opponents say could cost the state’s largest urban districts up to $270 million.

Ways to curb the state’s high property and income tax burdens are likely in the coming session, as Nebraska ended the fiscal year in mid-2022 with a nearly $1 billion cash reserve, and the latest forecast predicts a balance of $2.3 billion by the end of this fiscal year this summer. While some lawmakers are calling for the surplus to be returned to taxpayers through tax relief, others have cautioned against dipping into the reserve, noting the end of federal pandemic funds coupled with inflation and a possible looming recession will mean a significant drop in tax revenue in the next two years.

But the first day of the session Wednesday held none of those conflicts. As is tradition, the day was dedicated to setting committee chairs and swearing in new members, most of whom brought their families onto the Senate floor to observe the first day of the new session.

Lawmakers approved the lone nomination of Sen. John Arch of La Vista as the new Speaker of the Legislature. Arch, a former hospital administrator, replaces former state Sen. Mike Hilgers, of Lincoln, who was elected Nebraska Attorney General in November.