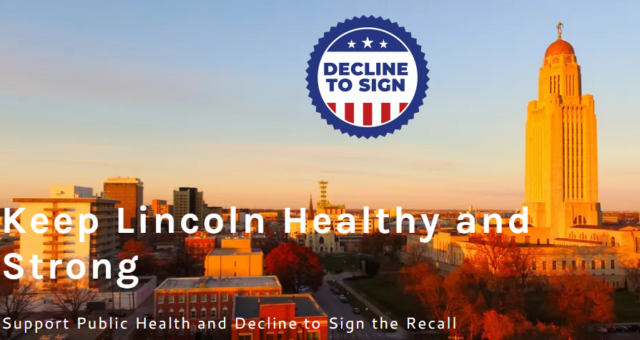 Lincoln, NE – (November 23, 2020) Decline to Sign, a group of concerned Lincolnites, launched their opposition effort to the LNK Recall group Monday.  LNK Recall has been calling on Lincoln’s voters to spend more than a quarter of a million dollars to hold what “Decline” members consider an unnecessary special election to recall the Lincoln mayor and four city council members.

In their kickoff, members of LNK Recall decried the work of the council and the mayor to protect public health, dismissing the pandemic as ‘a boogeyman’ and expressing their anger at the appointment of Lincoln-Lancaster County Health Department Director, Pat Lopez.

“This pandemic has put our community’s health care system in crisis, and a small group of anti-mask, pandemic-deniers want Lincoln residents to recall their elected officials instead of focusing on public health,” said Justin P. Carlson, Treasurer of Decline to Sign. “This recall effort is misguided and divisive, and does nothing to help our community through these difficult times. We encourage citizens to decline to sign the recall petition if approached by a circulator. ”

The “Decline” group cited others in the community who have spoken out against the recall effort, including Lincoln Firefighers Local 644, The Lincoln Chamber of Commerce, several doctors, public health experts, and members of the clergy.  Decline to Sign’s website can be found at http://DeclineToSign2020.com.