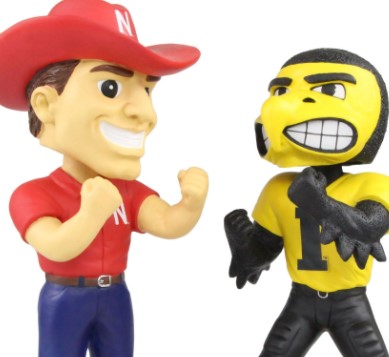 The bobblehead is the first to commemorate the rivalry and features University of Nebraska mascot Herbie Husker and University of Iowa mascot Herky the Hawk squaring off as rivals ready for battle. The bobbleheads were produced exclusively for the National Bobblehead Hall of Fame and Museum by FOCO, an official licensee and manufacturer of Nebraska, Iowa, and NCAA merchandise.

Each bobblehead is individually numbered to 1,000 and they are only available through the National Bobblehead Hall of Fame and Museum’s Online Store. The bobbleheads, which just arrived and ship now, are $60 plus a flat-rate shipping charge of $8 per order.

The Iowa-Nebraska football rivalry is traditionally held on the Friday after Thanksgiving, with the two teams set to square off this Friday, November 27 at Kinnick Stadium in Iowa City, Iowa at noon. Starting in 2011, the game was referred to as the “Heroes Game” with the Heroes Trophy being awarded to the winner. Last year, the teams met for the 50th time with the Hawkeyes pulling off a 27-24 victory – their fifth in a row over the Cornhuskers. However, Nebraska still leads the all-time series, 29-18-3.

Also being unveiled today is a bobblehead commemorating the Iowa vs. Iowa State rivalry. That bobblehead also just arrived and they are also $60. The two rivalry bobbleheads are the newest in the College Rivals Bobblehead Series, which started with Louisville and Kentucky in 2019.

“We’re excited to release this bobblehead commemorating the rivalry between Nebraska and Iowa,” National Bobblehead Hall of Fame and Museum co-founder and CEO Phil Sklar said. “This is one of the premier rivalries in college sports and we think fans of both schools will love this unique bobblehead.”