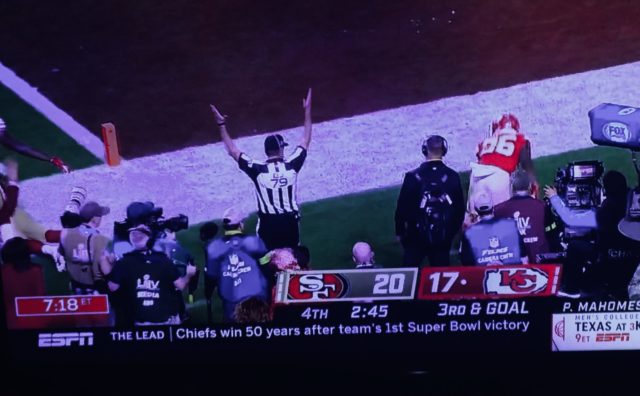 LINCOLN-(KFOR Feb. 5)-The University of Nebraska’s 26-year-long streak of having at least one alum appear in the Super Bowl may have snapped in 2020, but one Nebraska native still found his way onto the field.

Kent Payne of Palmer, Nebraska, donned his zebra stripes for the big game on Sunday. The former Nebraska Wesleyan basketball standout made his third appearance officiating a Super Bowl, acting as the Down Judge.

Payne was put on the spot when Chiefs Running Back Damien Williams dove for the pylon to take the lead against the 49ers late in the fourth quarter. In a split-second decision, Payne rose his arms up high to signal a touchdown, which was later confirmed by video replay.

After 15 years of officiating for the NFL, Payne said that the mechanics he refined from his experience play a part in every call he makes on the field, and this call was no exception.

Payne, the retired teacher now living in Denver, will join the KFOR broadcast of Nebraska Wesleyan basketball Wednesday night during halftime as the Prairie Wolves take on Coe.