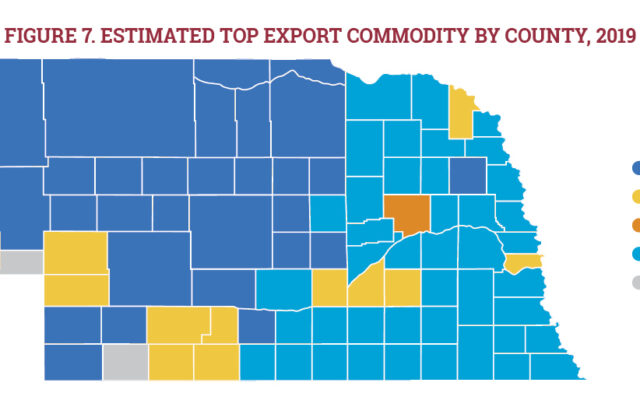 LINCOLN, NEB. (January 16, 2022) – The Nebraska Farm Bureau (NEFB) has identified three trade priorities for the Biden administration following a year in which, according to the organization, there was little movement on the topic. As a majority of the world’s consumers reside outside U.S. borders, international trade is vital to the economic future of Nebraska’s farm and ranch families. The success of international trade has led to agricultural exports consistently accounting for roughly 30 percent of each dollar going into the pockets of Nebraska’s farmers and ranchers.

“It’s critical the administration understands the connection. It has been a year since President Biden has taken office and we have seen next to nothing happening on trade. It’s the reason we’ve identified these trade actions the administration can take to support our farm and ranch families. Growing markets is vital to the health and profitability of our family businesses,” said Mark McHargue, Nebraska Farm Bureau president.

Farm Bureau’s trade priority list includes growing new markets, reaffirming the importance of and reforming the World Trade Organization (WTO), and topping the list is working to establish a long-term trading relationship with China while at the same time holding them accountable to international trade rules.

“Given China’s importance as a trading partner to U.S. farmers and ranchers, it is vitally important the U.S. and China move beyond the Phase One agreement. NEFB urges President Biden to normalize trade relations with China and push for the complete elimination of all tariffs on U.S. agriculture products going to China. At the same time, forcing China to play by approved international trade rules is also key,” said McHargue.

Other Farm Bureau priorities for the administration include growing new markets, which include congressional reauthorization of Trade Promotion Authority (TPA) for the president, providing the administration flexibility to negotiate trade agreements. NEFB has long supported granting either political party TPA because of our strong support for the expansion of new markets. While members of the Biden administration have been cautious in taking this step, requesting the extension of TPA and working with Congress to obtain the authority would show the rest of the world the administration is taking trade expansion seriously and the United States is open for business.

“We’re also encouraging the Biden administration to actively work for the U.S. to join the Comprehensive and Progressive Agreement for Trans-Pacific Partnership (CPTPP). Nebraska farmers and ranchers have captured a large portion of the benefits of CPTPP participation in the way of lower tariffs on U.S. beef and pork through President Trump’s trade deal with Japan in 2020. However, there are still areas of improvement that can be made, and the rest of the economy was largely left out of President Trump’s agreement. Outside of imports and exports, the value of the U.S. joining CPTPP would be found in helping the U.S. gain an increased leadership role in the region and help push back against the influence of China. President Biden must pull the U.S. off the sidelines and sign on to the CPTPP,” McHargue said.

While the role of the WTO has diminished over the past nearly two decades, the international institution which oversees rules-based trade remains important for farmers and ranchers. Issues such as agricultural subsidies, the digital economy, government owned businesses, and intellectual property theft all must be addressed in any WTO reform efforts. However, reestablishing the appellate body which was allowed to dissolve under the Trump administration has severely limited the body’s ability to function.

“U.S. agriculture wins under a global, rules-based trading system because our farmers and ranchers have the capability to beat all global competitors when it comes to producing agricultural commodities and agricultural products. However, the WTO cannot function property without an operating appellate body. While we agree reforms are needed, President Biden must allow for the appointment of new appellate body judges so that this important body can continue their work of being the arbiter of international trade rules” said McHargue. “Our members benefit when the WTO functions correctly.”

In addition to identifying trade priorities, the Nebraska Farm Bureau issued its 2020 Nebraska Agriculture and International Trade report. The report estimates the dollars and cents value of agricultural trade to Nebraska, projecting estimates for the value of agricultural trade for each Nebraska county, as well as per-farm estimates. The report, issued annually since 2017, acts as a barometer demonstrating the importance of trade to farmers, ranchers, and Nebraska’s economy. The estimates are calculated using USDA’s final trade numbers released in October 2021.

Platte County still holds on to the top spot in terms of value of agricultural exports in 2020. Custer, Cuming, Antelope, and Boone Counties round out the top five top export counties in 2020. Platte County experienced an estimated $191 million in value from agriculture trade in 2020. Phelps County again scored as the most reliant on trade on a per-farm basis, with an export value per-farm of $343,000.