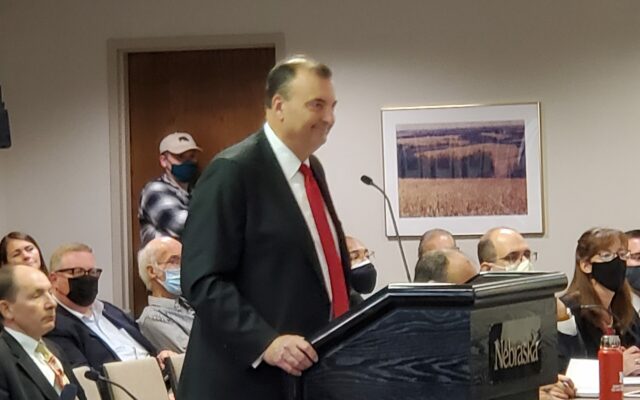 LINCOLN, NE (January 6, 2022) – The Nebraska State Chamber of Commerce and a group of state senators today outlined 2022 legislative measures they say will make “game-changing progress in developing and attracting talent, bolstering infrastructure, driving innovation and enhancing quality of life for all Nebraskans through 2050.”

“Ask any sector, any community, what is the #1 challenge holding you back? It’s people,” said Bryan Slone, NE Chamber president. “We need everyone we have and more, and we need them right now.”

“Our big ideas for a stronger, more vibrant Nebraska can happen. The time is now,” Slone added. “Bold moves in 2022 will break the status quo, boost quality of life and grow the economy at a size and scale not seen in a century.”

The NE Chamber, with local chambers of commerce (Lincoln, Omaha, and the NE Chambers Association), as well as the Nebraska Economic Developers Association, are asking state leaders to prioritize programs that:

Proposals, developed in concert with several state senators, focus on one-time investments in existing programs that already are operating in communities of all sizes across the state. They also align with initiatives in the Blueprint Nebraska strategic economic development plan.

Senator Mike Flood of Norfolk will introduce a $120 million workforce proposal to boost the talent pipeline and retain and attract young people in Nebraska, including:

Senator John Arch of Papillion will introduce a $195 million package to ramp up both public and private investment in infrastructure to bolster domestic supply chains and spur economic growth, including:

Senator Mark Kolterman of Seward introduced a $100 million proposal to invigorate the state’s transformation to tech-enabled commerce through one-time research and development, modernization and technology grants to businesses.

Senator Anna Wishart of Lincoln will sponsor legislation to infuse an additional $20 million into Nebraska’s Business Innovation Act to boost prototyping, product development and commercialization, and scaling of startup sectors.

Chambers of commerce and economic developers across the state have joined in coalition with other advocates to support policies that ramp up every community’s ability to attract new families, including:

Blueprint Nebraska proposed a framework for modernizing Nebraska’s tax code to better match our 21st Century economy, lower tax burden for all Nebraskans and sustain revenues necessary to meet commitments to public services and education. The NE Chamber supports this framework in concept.

“The combination of fiscal restraint, keeping Nebraska’s economy open as much as possible during the pandemic, and increasing demand for Nebraska goods and services has resulted in hundreds of millions in excess tax revenue and a healthy cash reserve – opening a rare opportunity to modernize,” Slone said.