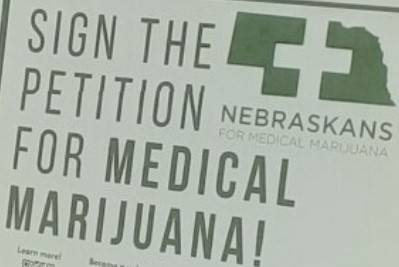 (KFOR NEWS  October 1, 2021)   With more than 250 active volunteers mobilizing in communities across the state, supporters of medical cannabis are launching their signature drive Saturday to put medical cannabis on the November ballot in 2022.  Led by a team of families and advocates who have built a grassroots movement to protect patients who need access to cannabis to alleviate serious health conditions, the circulators plan to take advantage of the crowds near the football game in Lincoln to kick off their effort.

NMM, the campaign committee backing the effort, is asking Nebraska voters to sign two statutory medical cannabis initiatives that work together to protect qualified patients from criminal penalties and regulate private businesses that provide medical cannabis. Patients are required to have a written recommendation from a licensed health care provider to qualify for the program. To make it on the ballot, supporters will need to collect 87,000 verified voter signatures for each petition by July 7, 2022.

Over the past several years, Nebraska parents and families with children suffering from severe illnesses have called on state lawmakers to enact more compassionate cannabis policies. But a small and powerful group of political leaders have repeatedly blocked those efforts.

Nicole Hochstein, NMM’s regional volunteer coordinator for Cedar County,  is the mother of Jayen, an 11-year-old diagnosed with epilepsy. She said the movement for medical cannabis has never been stronger and added:

“It is frustrating that politicians have ignored the will of the people and denied my son and thousands of other patients the compassion they deserve. But this ballot campaign provides hope to families like ours. We are seeing democracy in action today, and I look forward to talking with hundreds of more Nebraskans over the next nine months and asking them to sign these two very important initiatives.”

State Senator Anna Wishart, a staunch advocate for medical cannabis in the state’s Unicameral Legislature, is spearheading the ballot initiative committee. She will be collecting signatures for the measure in Lincoln tomorrow and commented:

“I have personally talked about this issue with voters from dozens of counties across Nebraska, including some of the most rural parts of the state. There is an outpouring of grassroots support for this issue — regardless of someone’s political background or views on other issues. I believe that is because it’s fundamentally about having compassion for people who are suffering. The average Nebraskan understands that, and we are looking forward to November 2022 when voters will finally have their say.”

The text of both statutory petitions can be accessed at https://nebraskamarijuana.org/petitions.