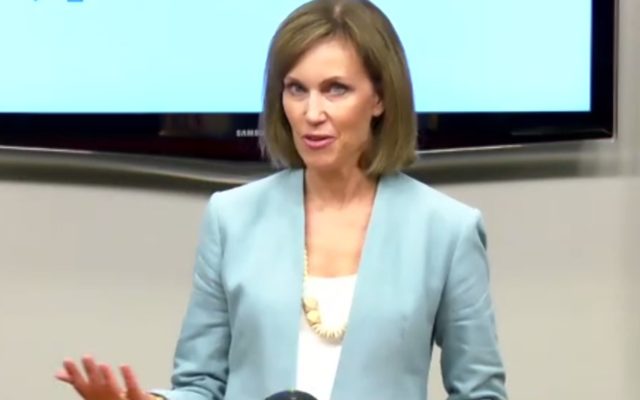 Lincoln, NE – Today, Mayor Leirion Gaylor Baird announced her intention to run for reelection as mayor of Lincoln and outlined her accomplishments and future priorities for the city.

“Public safety continues to be my number one priority,” she said. “I have prioritized strengthening public safety since my first day in office, both as a city councilor and now as mayor. I have delivered on this issue by using the tools I have – most notably our City budget – to ensure our community is a safe one.”

Since being sworn into office in 2019, the mayor has invested heavily in police and fire services in every City budget. During her administration, she has increased the total number of Lincoln Police Department (LPD) professionals by 31 and the total number of Lincoln Fire and Rescue (LFR) personnel by 28. As part of her commitment to public safety and to enhance LPD’s ability to retain and recruit top talent, the mayor in 2022 made Lincoln’s police officers the highest-paid law enforcement officers in the state of Nebraska. In 2022, violent crime, felonies, misdemeanors, traffic accidents, and traffic injuries all have decreased relative to the previous five-year period, and Lincoln’s violent crime rate is at a 30-year low despite the city having grown by more than 100,000 people since the 1990s.

Mayor Gaylor Baird also will continue to prioritize strengthening Lincoln’s infrastructure, with a keen focus on streets. “Whether transporting workers to jobs, children to schools or first responders to emergencies, well-maintained streets are critical to all Lincoln residents,” said Mayor Gaylor Baird. “That’s why we put our money where it matters and have invested $61.4 million in streets from September 2021 to September 2022 alone, increasing our total street investment since 2019 to an historic $167 million.”

“Economic recovery and renewal has been a focus of my administration, and creating economic opportunities for all will continue to be at the forefront of my work when I am re-elected,” said Mayor Gaylor Baird. She noted Lincoln’s exceptional economic recovery in the wake of the global pandemic. Lincoln ranked first in unemployment recovery when compared with 180 cities by WalletHub. The Milken Institute Best Performing City index cited Lincoln as one of four cities already ranked highly and continuing to rise, noting that from 2021 to 2022, Lincoln made big gains in one year job growth, one year wage growth, and five year job growth. “Along the way, our city team supported those financially impacted by the pandemic and collaborated with non-profit service providers and the Tenant Assistance Project to help over 5,000 households pay a combined $40 million in rent and utilities,” said Mayor Gaylor Baird. “This helped provide financial stability to renters and landlords during an extraordinary moment in our history.”

“I am inspired to serve because I care deeply about our community. Lincoln is where my husband and I are raising our children – this is our home. Making this city the best possible home for everyone, a home where anyone can build their lives and livelihoods, has been my focus for nearly 20 years,” said Mayor Leirion Gaylor Baird. “I have worked to grow the strength and success of our city as a community volunteer, planning commissioner, city councilor, and as mayor. It has been the honor of a lifetime to serve our great city as your mayor these past four years.”

Mayor Gaylor Baird currently serves on the Advisory Board of the U.S. Conference of Mayors and as Chair of the U.S. Environmental Protection Agency’s Local Government Advisory Committee. She previously served on the Lincoln/Lancaster County Planning Commission and the Lincoln City Council. In 2016, she was one of 24 state and local elected officials from across the country awarded a Rodel Fellowship in Public Leadership by the Aspen Institute.

Mayor Gaylor Baird began her professional career as a management consultant, helping Fortune 500 companies become more efficient. She has worked as a city budget and policy analyst and as the director of a Boys and Girls Club founded to improve educational outcomes for children from low-income families.

Mayor Gaylor Baird holds a B.A. from Yale College and an MSc in Comparative Social Policy from the University of Oxford. She and her husband, Scott, have three children and live in Lincoln’s Near South neighborhood.